The Netherlands took a giant step towards returning to the FIVB World League for the first time since 2010 by beating the Dominican Republic in straight sets (25-22, 25-22, 25-21) in the first of two World League 2012 qualification first round match at the Topsport Centre of Rotterdam on Friday. 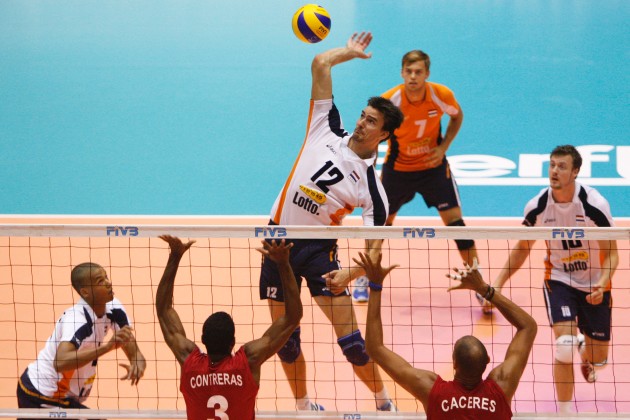 The hosts now just need to win one set to advance to the second round of qualification where they will take on Portugal, who finished 16th in the 2012 edition of the World League, for a spot in next year’s edition.

Caseres Gomez opened the scoring and after the first long rally, the scores were tied for the first time at 3-3. Still the Dominican Republic had the better part of the game in the opening phase, which resulted in the visitors boasting a lead of four points at 11-7 when Caseres spiked again down the centre of the court. Two aces from Dutch setter Nimir Abdelaziz saw the hosts pull back within one at 11-10 but again the Central Americans managed to stretch their lead to 17-14. The fans in Rotterdam increased their support when Wytze Kooistra, playing his 200th cap, gave the Netherlands the lead for the first time in the match at 18-17. Thanks to some superb play from Jelte Maan and Tony Krolis, the Dutch slowly walked to the first set win. A block by captain Rob Bontje and Abdelaziz created the first set point before Elnis Polomino Castello served out.

In the second set there was little separating the two teams in the first half. A three men wide Dutch block tied the scores at 10-10 before Castillo spiked superb to give the Dominican Republic the lead at 14-13. The Dutch drew level again at 17-17 before a stern team talk from coach Edwin Benne helped the Netherlands clinch the second set thanks to a block from Kooistra, which provided set point, and a spike from Jeroen Rauwerdink.

The last set of the day saw the Netherlands start superbly leading 5-1 with Kooistra scoring three points in a row. That lead was still intact when the teams reached the first technical time out, but then Caceres also demonstrated how to score three points in a row to pull the score back to 8-7. With Emmanuel Lara Calderon on the field for Eduardo Concepcion, the Dominican Republic came back into the game at 15-15. A well placed tip from Maan gave the Netherlands the lead at 18-17 before a block by Abdelaziz and Kooistra on Contreras widened the margin to two points again at 22-20), causing Dominican coach Osiel Vasquez to call for a time out. However, it couldn’t stop the Netherlands as Abdelaziz spiked the 23rd Dutch point, followed by a well-placed serve by Bas van Bemmelen. The first match point was saved by the Dominican Republic before Kooistra ended the match in convincing fashion with a defence-splitting attack.