“I support the European Volleyball Championship in 2013!” Those who attended yesterday’s matches that opened the program of Pool II in Randers might have seen people with paper speech bobbles going around and taking photos of the fans in the stands. 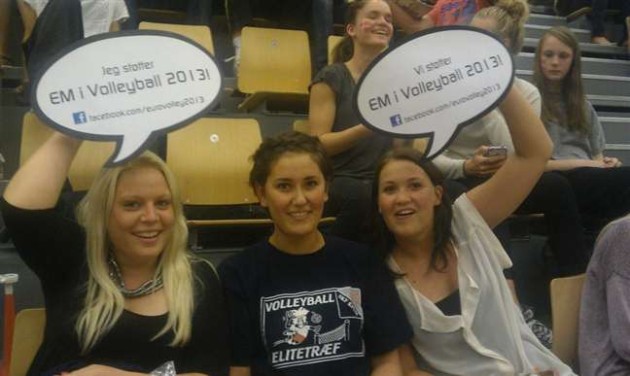 The Danish organizers are profiting of the attention being drawn by the Junior European Championship taking place in Randers to promote next year’s Senior Championship where the semi-finals and final will be played in Parken, Copenhagen.

All pictures resulting from this action are added to an album available on the Facebook page of the 2013 European Championship. People are tagging themselves and thereby promoting next year’s Championship, at the same time enjoying the opportunity to win tickets for the highlight coming up in 2013.

“We would like to involve the entire Volleyball community in Denmark and Europe in these Championships. By tagging yourself on the “I support the European Volleyball Championship in 2013!” picture, you work as an ambassador for the championship and are helping spread the message that the championship next year is going to be historic”, says Mads Bang Aaen of the Danish Volleyball Federation.

One of the people tagged with the bobble is Mads Gerner Pedersen: “I think it is a funny idea with the speech bobble. It creates a good atmosphere among the audience and many people wants to have their picture taken. I think it is a funny and innovative approach to draw attention to the European Championship in 2013” he comments.