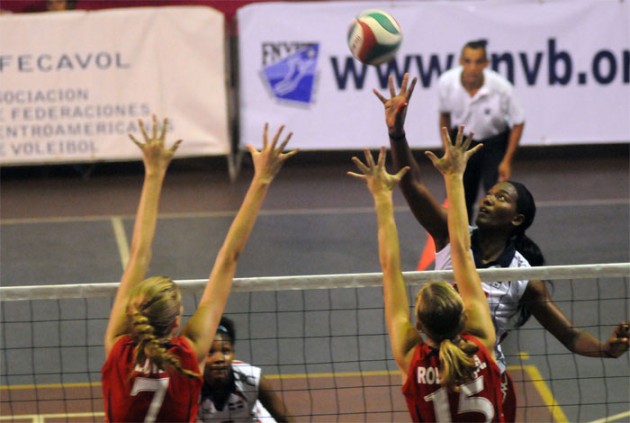 As finalists of the continental competition, the Dominicans secured one of the three vacancies of NORCECA to the 2013 FIVB Women’s Junior World Championship to be held in Czech Republic.

Brayelin Martinez once again finished with double digits by scoring 29 points to carry the Dominican side to the victory. Pamela Soriano contributed 15 points as the winners were superior in blocks 17-13 and in aces by 6-4. During the third set, Morete Lutz was a loss for the American team as she suffered a minor injury.

USA’s captain Kelsey Humphreys said: “We stopped believing in ourselves and to fight as hard as we did in the first two sets and Dominican Republic is a great team, the last time we played we had the opposite outcome.”

“We wanted to do things well so badly that in the beginning we pressured ourselves too much, we knew it was a difficult match and we never stopped fighting following all the instructions of our coach,” pointed out Dominican captain Pamela Soriano.

Brayelin Martinez was invited to the press conference by Nicaragua’s press. “In the beginning things weren’t going right for me but with the support of my team I took back control of my game.”

“Happy for the victory,” were the first words of Wagner Pacheco, the Brazilian Coach of Dominican Republic. “Defeating USA is not easy, they knew how to neutralize my players but with some adjustments things improved and the Americans began making mistakes; I’m happy for the qualification to the world championship, our first goal in the tournament.”

Rodney Wilde, American coach expressed: “These are very good teams that fight hard against each other and I want to congratulate Dominican Republic for a great come back, our team started getting tired without keeping up the same level of fight that we had in the first two sets.”