Mexico won its opening 2012 NORCECA Men’s Junior Continental Championship match with a 25-7, 25-10, 25-15 victory over St. Vincent and the Grenadines on Monday afternoon at the U.S. Olympic Training Center in Colorado Springs, Colorado. 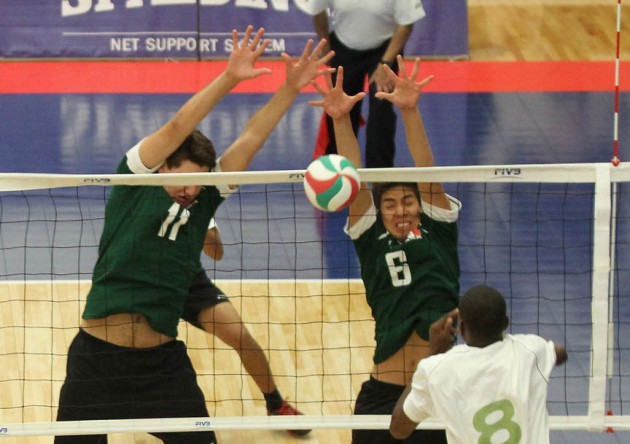 Mexico – St. Vincent and the Grenadines

Mexico, with nine different players scoring, was led by Marco Rodriguez’s 10 points, while Jesus Perales chipped in nine points. Irving Gonzalez tallied five aces in the match for Mexico in a non-starting role.

St. Vincent and the Grenadines was paced by Ijahlon Butler’s eight points.

Mexico reached the second technical timeout of the opening set leading 16-5 and cruised to the 25-7 victory. Mexico controlled the entire second set with a 25-10 victory ending with consecutive aces. St. Vincent and the Grenadines pulled to within two at 10-8 in the third set, but Mexico erupted for a 6-1 run en route to a 25-15 victory.

Mexico resumes Pool A action on Tuesday against Honduras at 13:00, while St. Vincent and the Grenadines will challenge the host United States at 17:30.

“I thought this was going to be a complicated match as we did not know our opponent”, Mexico head coach Justo Arias said. “Plus, we did not arrive until last night and had our first training here this morning. I thought it would take a while to get into a rhythm, but fortunately, we caught up in rhythm and got the job done.”

“We thought it was going to be hard match with our nerves”, Mexico captain Jonathan Ponce said. “We were able to control the key moments of the match. In the end, it was a positive result.”

“I think we tried hard, but we did not do our best”, St. Vincent and the Grenadines captain Ijahlon Butler. “In the next match we will be better. Tomorrow we play USA, but we believe.”

“I think the guys were a little nervous”, St. Vincent and the Grenadines head coach Brian Burke said. “I don’t think we did as well as we could have. We were let down by our blocking and passing, so we will work in those areas. Tomorrow and in upcoming games we will get better.”