Canada advanced to the NORCECA Men’s Junior Continental Championship gold-medal match with a 25-17, 25-18, 24-26, 25-21 victory over Mexico on Friday afternoon at the U.S. Olympic Training Center in Colorado Springs, Colo. 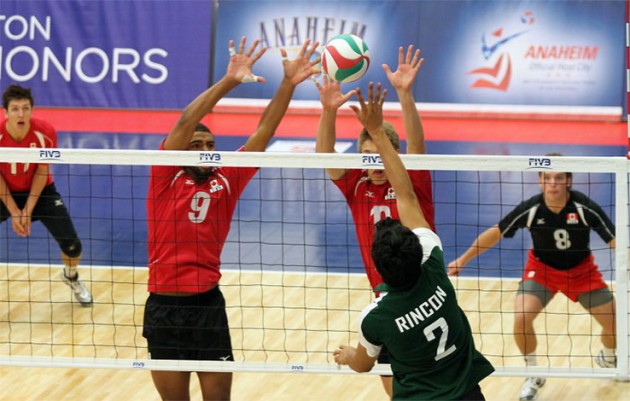 Canada will face the second semifinal winner of United States and Puerto Rico on Saturday at 17:30, while Mexico will challenge the loser for the bronze medal. The top three finishing teams in the tournament advance to the 2013 FIVB Volleyball Men’s Junior Continental Championship.

Canada’s block provided a 13-5 scoring edge over Mexico, in addition to a 60-54 edge in kills. Canada was credited with a 37-30 advantage in digs led by Tyler Koslowsky’s 14.

Canada’s block was dominant throughout the opening set with five in the 25-17 victory. Canada also held its errors to three in the set and used seven Mexico errors to its advantage. Canada used consecutive aces by Milan Nikic to reach a 16-11 lead at the second technical timeout of the second set and forged ahead to a 25-18 victory. Canada opened the third set leading 3-0, but Mexico came back to square the set at 8-all. The set stayed close the rest of the way as Mexico tied the set up at 23-all after trailing by two most of the way. Mexico saved one match point and took the set 26-24 on a Canada error. Mexico came back from an 8-5 deficit in the fourth set to take a 14-12 advantage. Back-to-back Canada blocks put it back in front 17-16 and went up 21-18. Canada finished set at 25-21 with the final four of five points.