WL M: Iran and the Netherlands confirmed as new teams in 2013 World League

Both of the bottom two teams from the 2012 World League, Japan and Portugal, lost their places in the 2013 edition to challengers in the qualification process that ended September 9. In the final round of playoffs, Iran powered their way past Japan in convincing fashion while the Netherlands squeaked past Portugal in a hard-fought series. 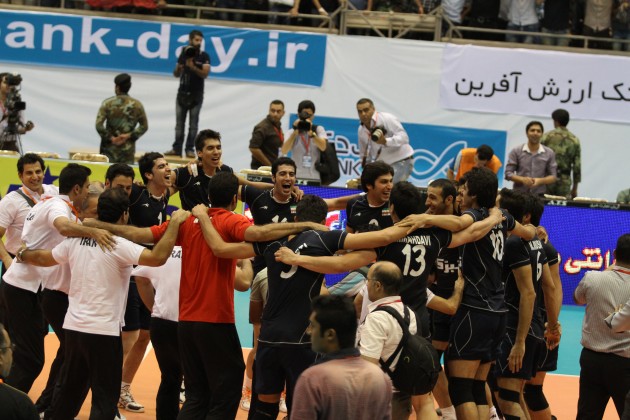 The World League qualification process allows two teams the opportunity to challenge for the right to play in the annual men’s competition. This year, four teams were in a position to contend for that right, so first-round playoffs were held between the Netherlands and the Dominican Republic, on the one hand, and between Egypt and Iran on the other. The Netherlands and Iran emerged from those two-game series on top, gaining the chance to replace Portugal and Japan in the 2013 World League.

The rules stipulated that if a challenging team is from the same continent as one of the teams being challenged those two automatically play each other. In the second round of playoffs the Netherlands were therefore paired with fellow Europeans Portugal while Iran faced their Asian counterparts from Japan.

The Netherlands beat Portugal in two thrilling five set encounters in Rotterdam to return to the World League for the first time since 2010.

Prior to the playoff, it was hard to pick who would win it. Playing at home and looking to build on their storied history in international volleyball, the Dutch, ranked 41st in the world, were hoping to return to the World League for the first time since 2010 and for the 17th time in 23 editions. Meanwhile Portugal, ranked 38th in the world, were out to defend the World League spot which they had held for the past two years. Their 16th place finish in 2012 meant they had to enter the playoff system. They would have fancied their chances, considering they beat the Netherlands 3-0 (25-20, 25-22, 25-18) in 2010 in pool play of the 2011 European Championships. At the FIVB level, however, Portugal had yet to take a set from the Netherlands in a total of nine FIVB World League matches. In the end, the Dutch crowd may have been the difference.

Iran’s victories on September 7 and 9 were their fifth and sixth successive wins against world No. 19 Japan. The second leg of the two-match qualification series in Tehran September 9 ended 3-0 (25-16, 25-17, 25-21). Farhad Ghaemi top scored with 11 points, while regular scoring machine Shahram Mahmoudi chipped in with 10.

The 15,000 fans filling Azadi Hall in Tehran cheerfully watched their home team continue to dominate the visitors, with celebrations reaching a fever pitch when Iran won the first set – Iran had already won the first leg 3-0 (25-19, 25-14, 25-23) and only needed to win a set or have a superior points ratio to gain their first berth in the World League.

Iran came into the series against Japan having just overcome the tough assignment of beating Egypt in Cairo. As with the Netherlands and Portugal, it was the first time either team had played on home soil – though that didn’t seem to favour Egypt as Iran won the two-match playoff in impressive style.

It continues an impressive run by Iran against Egypt, as the world No. 14 has now beaten the world No. 13 four times in five games (including the last three encounters), extending to last year’s World Cup and the 2009 Grand Champions Cup.

FRA M: Laurent Tillie is not surprised by Moreau