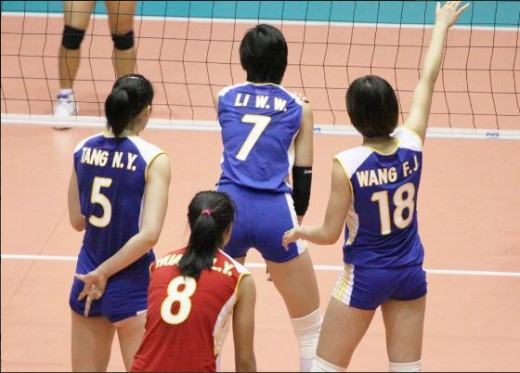 The Chinese fielded a strong line-up against Vietnam, which included the 193cm-tall Xu Ruayo, Wang Fengjiao and Tang Ningya.

China got off to a promising start, with Wang Fengjiao and Li Weiwei producing sharp spikes to race to a commanding 17-8 lead. The attacking rhythm remained with China and Xu Ruayo gave her team the crucial set point with a powerful cross-court spike. Things turned sour briefly for China when Li Weiwei’s serve went wide, allowing Vietnam another chance for survival. However, China did not blow their chance. Zheng Yixin hit a lightning fast spike to end the lower-ranked rivals’ challenge in the set. China took the opener 25-12.

Their confidence boosted after the first-set win, China rode the excellent offensive combination of deadly spikes from Wang Fengjiao and Xu Ruayo and solid blocking by Li Weiwei and Tang Ningya to build a 16-6 lead. Vietnam regrouped and hit back bravely, with Ha Ngoc Diem unleashing a series of spectacular spikes to help her team win three straight points and narrow the margin to 9-16.

From then on Vietnam put on a good show, hoping to gain more points. But China were just too strong, allowing them only three more points to wrap up the set 25-12.

Holding a 2-0 advantage, the Chinese were so confident of winning three straight sets that they rested their best players and instead fielded substitutions including Wang Ning, Chen Jiao, Zhu Ting and Yang Fangxu. They did not let coach Xu Jiande down, giving superb performances as they captured the one-sided set 25-7 and won the match.