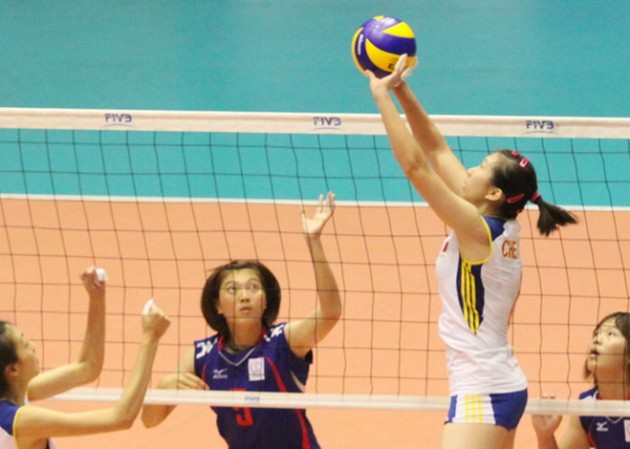 Meanwhile, In the third-place match, Japan shattered the home enthusiasts’ high hopes to see their team step on the top-three podium when they overcame Thailand in hard-fought five-set thriller 25-22, 20-25, 23-25, 25-18, 15-11 to claim the third place in the nine-day competition.

By finishing in the top four, China, Chinese Taipei, Japan and Thailand all advance to the 2013 FIVB Women’s Junior Volleyball World Championship in Czech Republic.

The China’s scintillating 25-18 25-15 25-9 win in the final clash against Chinese Taipei, the team they had beaten in straight sets in their Pool F playoffs earlier, stretched their invincibility to 10th time in the biennial tournament which inaugurated in 1980 in Seoul, Korea.

China, the FIVB world No.1 which finished third at the last year’s world junior women’s meet in Peru, had won the championship for nine times since their first triumph in 1992 in Kuala Lumpur.

Chinese Taipei, receiving a huge boost from a strong cheering section at the competition venue, mounted a tight defence in the second set. Still, China read the rivals’ game well and continued their onslaughts. Zhu Ting displayed her majestic talent through powerful jump serves, tearing the Taiwanese defence into shreds for the China’s commanding 13-6 lead.

Chinese Taipei, powered by Lee Yu, found their rhythm briefly in the middle of the set, but their attacking was shortlived when China stormed on mightily with their power and height at the net to clinch the 25-15 win.

The third set turned a totally one-sided affair. Zhu Ting, whose numerous spikes made Chinese Taipei flat-footed several times, unleashed a barrage of spectacular spikes from all sides, while the hefty Xu Ruayo carried out terrific jump serves. China led from the beginning to capture the comfortable set 25-9 and the championship.

Following the victory, the Chinese players jumped for joy. They cheerfully ran around in a circle and happily hugging one another. Later, they ran around the stadium, lined up before the Thai fans seated on each side of the venue, raised their arms up and bowed down heads to them.

“I’m glad that we successfully defended our title. We played well up to our level, while Chinese Taipei also fought hard with their good tactics. However, we still have many things to learn in preparation for the next year’s world meet in Czech Republic,” said China’s head coach Xu Jiande.

POL: Elections in the Polish Volleyball Federation. For the third time Mirosław Przedpełski has been elected President. The new Board of Administration of the PVF.