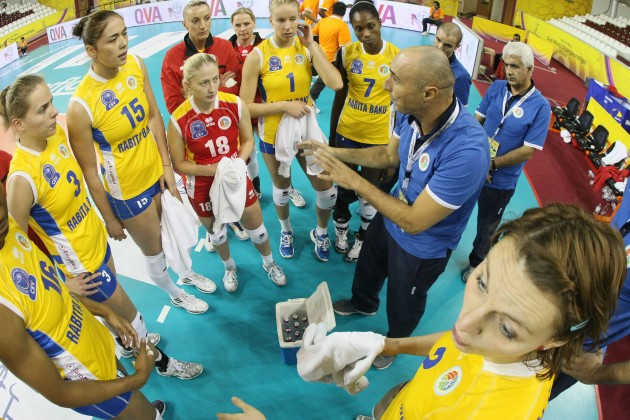 Angelina Hübner (née Grün) was signed by Rabita and is probably the greatest addition to a group of real standouts that includes also Manon Flier and Megan Hodge (Azerrail), Foluke Akinradewo and Madelaynne Montano (Rabita), plus Corina Ssuschke-Voigt and Czech Aneta Havlickova that will represent the likes of Lokomotiv.

According to all local experts, Rabita, Azerrail and Lokomotiv shall fight for the crown but there is an additional team to watch out for, Baki-Azeryol, that last year made it to the final of the CEV Volleyball Challenge Cup losing there to the compatriots of Lokomotiv. Baki has signed a few players of the Azeri national team, namely Yelena Parkhomenko, Odina Aliyeva and Anastasia Gurbanova. The most enigmatic side is probably Igtisadchi that has contracted a total of seven (!) members of the Thai national team, plus American Nancy Metcalf. The last two teams set to compete in the national league are Lokomotiv Baladzhary and Telecom that will be trying to upset the above mentioned favorites.

Rabita has claimed the title for the past five years but this time it won’t be easy as all other teams have significantly strengthened their rosters. They all have entered some friendly matches or tournaments but the right chemistry is still to come and will probably be there halfway through the season in the national league and European Cups.

The format of the national league was also re-shuffled and consists now of four rounds. At the end of this long campaign the team having brought home the highest number of points will claim the title. The attribution of points was also modified in accordance with the rules applied for the European Cups, so the winner of a match ending in a 3:2 will get 2 points and the loser 1, while three points will be attributed to the team winning by 3:0 or 3:1. The first round of the league will last for two months and end on December 18; the second will run through December 21-February 18, the third from January 22 to April 4 and the last through April 9-24.

FIN M: Castellani is no longer the coach of the Finish national team