ROM M: Tomis CONSTANTA is not afraid of iron group

Tomis CONSTANTA introduced to the media the upcoming campaign in the 2013 CEV Volleyball Champions League. The first match is against PGE Skra BELCHATOW, then they go against Fenerbahce Grundig ISTANBUL, and Dinamo MOSCOW. 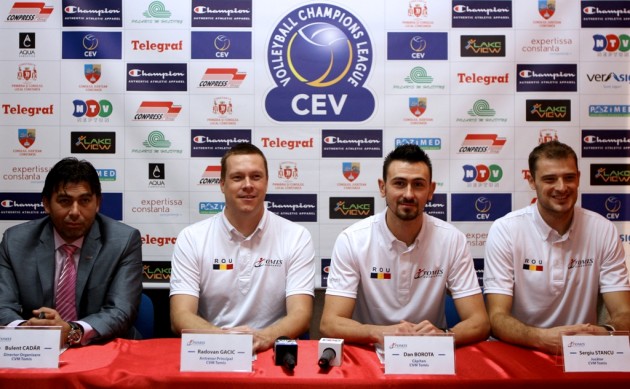 Tomis was assigned by the DOL to an “iron group” that includes Turkey’s Fenerbahce Grundig ISTANBUL, Dinamo MOSCOW of Russia (winner of the 2012 CEV Volleyball Cup) and last year’s silver medalists from Poland. Tomis will debut next Tuesday, October 23, against Dinamo playing in Russia’s capital city.

“Right after completion of the DOL we could understand that we were about to compete in what is definitely the toughest group of the past few seasons. However, this does not mean that we join the competition by immediately waving the white flag. Our goal remains to play well and win. We have prepared carefully for this debut and even though anyone may dream of finishing first, we have to be realistic. We expect matches against the real Volleyball elite and we will try to stand this challenge” said head coach Radovan Gacic.

“We play in a difficult group against strong teams. I hope we can stand the pressure and play our best as it is a honor and a pleasure at the same time to cross our ways with some of the best sides in the world” added team captain Dan Borota. Sergiu Stancu, who played in the finals of the CL in 2007 alongside TOURS VB of France, stressed: “I feel honored to join this world-class competition; we expect a difficult match in Moscow but we have prepared well and look forward to our debut”.

“After finalizing some great transfers we hope to have a good Champions League campaign” said Organizing Director Bulent Cadar. “We have difficult matches ahead but we also expect many fans to come to the sports hall to support our guys. I would also like to thank all sponsors and partners for their valuable help”.