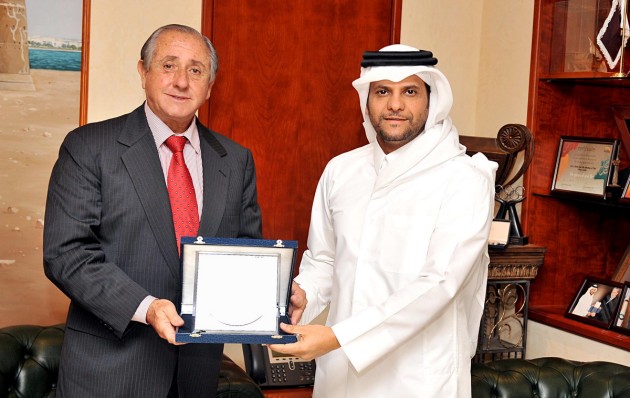 The FIVB officials are visiting Doha to attend the 2012 FIVB Club World Championships being organized by the Qatar Volleyball Association which started last Saturday and finish on Friday.

The QOC secretary general greeted Dr Graça F° and stressed the keenness of the QOC to cooperate and coordinate with the FIVB. H.E. Sheikh Saoud also wished all success for Dr Graça F°, in his new mission as President of the FIVB and thanked him for selecting Doha to be his first destination after the elections.

Likewise, the FIVB President applauded Qatar’s comprehensive development in sports infrastructure and its ambitious strategy for development in all sport fields at both regional and international levels.

He also praised the Qatari hospitality and the excellent organization for the FIVB Club World Championships which Qatar has revived after a 17-year gap under the patronage of HH Sheikh Tamim bin Hamad Al-Thani, the heir apparent and President of the Qatar Olympic Committee.

Talks during the meeting centered on ways of expanding sport cooperation and exchanging experience between the FIVB and the QOC.

Moreover, the secretary general hosted a luncheon banquet in honour of the FIVB officials at the QOC headquarters.

The meeting and the luncheon banquet were attended by Mr. Fisal Saleh Al-Mansoori, director of the QOC Public Relations and Marketing Department, Mr. Yousef Kanu and Mr. Ali Ghanim Al-Kuwari, Board Members of the QVBA.