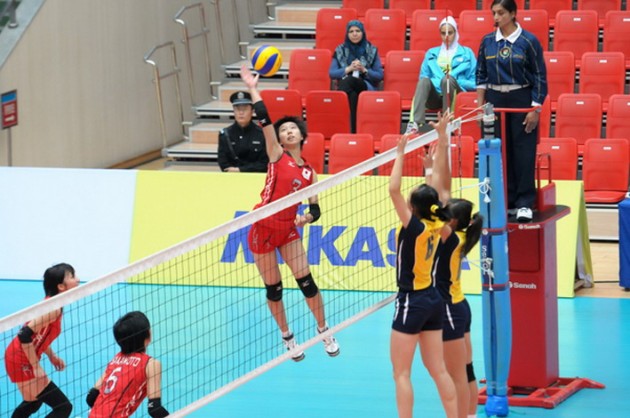 Hong Kong was unable to position themselves in defending against the opponents’ patented quick rhythm. They suffered from a succession of errors that brought the Japanese side to a 13-0 edge. Not even coach Lee Yue Ting Terry’s substitute players could stage decent defence in the face of the Japanese artillery. The opening set only gave six points to Hong Kong, mostly off their opponents’ errors.

In the second set, the Japanese offense continued to highlight its most favourable weapon, Sarina Koga. She operated effectively with powerful kills from the left flank and from the backrow, allowing the Japanese side to control the match. Hong Kong struggled with their offense as they were limited to Yan Ching’s spikes. Japan, on the other hand, enjoyed a comprehensive game plan, with Shino Nakata connecting on her attacks as well.

In spite of strengthening their plays, Hong Kong failed to retaliate against the unstoppable offense of the defending champions.

Japan will advance to the semifinal round to face off with the winner of the quarterfinal match between Thailand and Korea.