The Dominican Republic are the heavy pre-event favorite side as the NORCECA-C First Round Tournament of the 2014 Men’s World Championship gets underway on Saturday in Santo Domingo. Read more about latest volleyball news, games reports, and statistics on WorldofVolley. 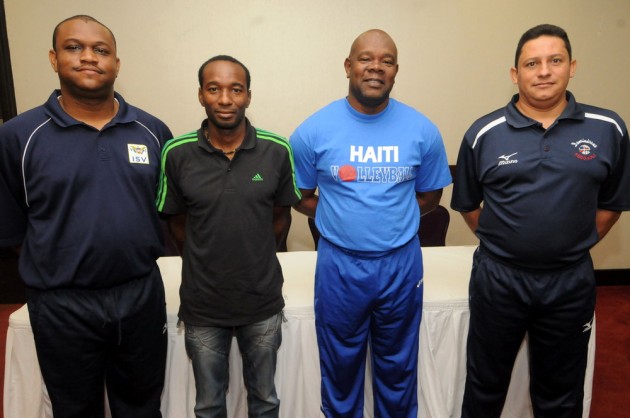 Coaches of teams playing in the NORCECA-C

Osiel Vasquez, the Cuban coach of the home side, is confident about his team’s chances of finishing on the top position at the conclusion of the four-team competition. U.S. Virgin Islands, Guadeloupe and Haiti are the other participants.

“We have been training hard for four months now and the preparation has been very good,” Vásquez said on the eve of the start of the tournament. “We began training for the Pan American Cup, then played the World League qualification tournament and took part in the U-23 Pan Am Cup.”

“Sixty percent of that team is going to play here,” Vásquez added. “Our goal is to finish first here to be in a good position for next year’s round.”

The Dominican Republic meet Guadeloupe in the opening match of the competition followed by the match between U.S. Virgin Islands and Haiti.

“Our team has been training for the past two months,” Guadeloupe’s coach Ismael Olivier said. “Our goal is to finish among the top three teams here to secure the pass to the next round.”

Mark Daniel, the U.S. Virgin Islands coach, said his team is a mix of veteran and junior players good enough to guarantee the ticket to the next phase.

“We expect to compete,” Daniel said. “We are bringing some of the older players mixed with members of our junior team. We won the silver medal in the Trinidad & Tobago tournament and we expect at least to play in the final match of this championship.”

Haiti’s Yves Joseph Lemieux stressed on the good physical condition of his team and commented also on the technical aspects.

“We have been training for two months and our physical condition is good,” Lemieux said. “We have a good offensive presence but also need to work on the serve reception and the overall defense.”

The NORCECA-C is the seventh men’s qualification tournament towards the 2014 FIVB Men’s World Championship to be held in Poland.

The preliminary enquiry and the general technical meeting took place on Friday under the supervision of Nelson Ramirez, NORCECA’s general manager.

ITA M: Kaziyski about big match on Sunday: “An important appointment with Cuneo”