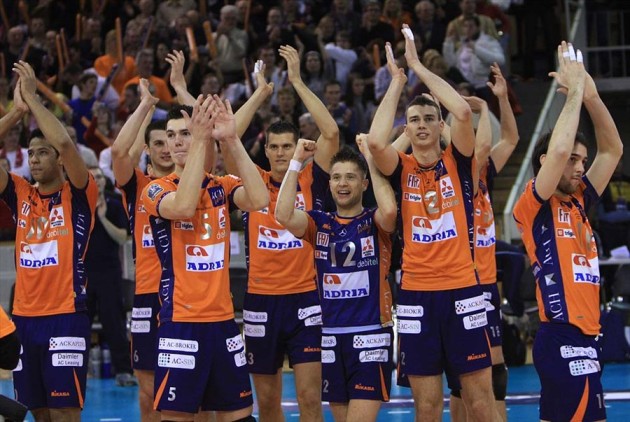 For both teams the encounter also is the dress rehearsal for next week’s European Cup’matches. On Wednesday Ach Volley Bled hosts Euphony ASSE-Lennik. To date the Belgian representative have not any score. So Bled may hope to win the first match at home in the Champions League-group stage.

In the CEV Cup-round of the last 16 Kamnik encounters an attractive adversary. With Posojilnica Aich/Dob comes a MEL-competitor (14. November). On Sunday Posojilnica competes away with Unicef Bratislava. On the next Thursday the Slovakians play their second round-Challenge Cup-match versus Galatasaray Istanbul.

After a defeat run the MEL-titleholder Hypo Tirol Innsbruck is back on winning track. On the last Monday the team of headcoach Stefan Chrtiansky gave Chemes Humenne short shrift away 3:0. On Saturday at home in the USI-arena versus bottom-placed club Fino Kapsovar the Tiroleans want to grow along in confidence for the biggest possible challenge on the 14th of November. At this date Innsbruck challenges the Champions Leauge-titleholder Zenit Kazan.

In the fourth match of the MEL-weekend Mladost Marina Kastela hosts Chemes Humenne. Both teams are only again at the beginning of December in Challenge Cup action.

TUR M: Fenerbahce is out of the Turkish Cup