Atom Trefl SOPOT finished the regular season of Poland’s national league in fourth place and after a break of one month the team will re-start its campaign in the Playoffs by playing there PTPS PILA. Justyna Lukasik and Anita Kwiatkowska shared their thoughts. 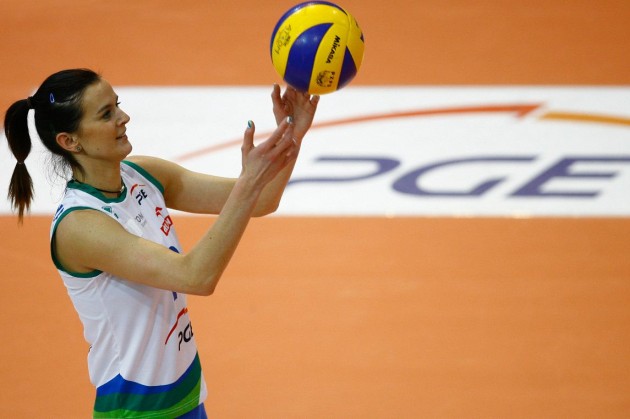 Last year’s national champions showed that they want to retain their crown by completing the regular season with a 3:0 win over AZS Metal-Fach BIALYSTOK on Saturday to follow up on a ceremony whereby the day before the club had been awarded as Team of the Year 2012 in Sopot.

“The season has not finished with the regular season and our goal is to win the title once more” says middle blocker Justyna Lukasik who was voted MVP of the match against AZS Metal-Fach. “The Playoffs are the most important phase of the season where every match will count and we’ll always fight for a positive result.“

This coming March 16-17 Atom Trefl SOPOT will open the Playoffs by testing out the likes of PTPS PILA. “I am happy to get this opponent because we have beaten them twice this season. We have no problems to play this side” stresses Lukasik.

“We thought we would cross our ways with Budowlani LODZ but eventually our opponent turned out to be PTPS PILA. At this stage of the competition you do not get any easy opponent so if we want to go for gold, we need to best every single team along the way to the finals” singles out spiker Anita Kwiatkowska.

The players of Atom Trefl will now enjoy a break of 4 days to recover from their busy schedule in the national league as well as in the European Cups. The players will come back to Sopot on Thursday and start their preparations for the final stage of the national cup coming up one week before the start of the Playoffs.