This past week Atom Trefl SOPOT had a training session whose main ingredients were wind, speed, adrenalin, and sports rivalry. All this happened at PGE Arena, the football stadium situated in Gdansk that last year hosted some matches of the UEFA Euro 2012. 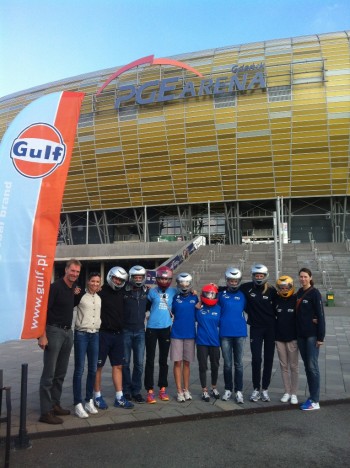 The girls showed up wearing their usual uniforms with the only exception being Yuliya Shelukhina and Klaudia Kaczorowska who decided to cheer on their teammates and followed their actions from the stands. The same did their head coach Teun Buijs:

“I am their mentor and it is my duty to follow what they are doing here but after that I will be doing the same” he said after being questioned about his absence from the track.

Natalia Gajewska, Izabela Belcik, Anna Podolec, Justyna Lukasik and Magdalena Kuziak all took on a go-kart race together with their assistant coaches Piotr Graban and Piotr Matela. Mariola Zenik stopped after completing one lap. Though she had drunk a coffee before the race, she said that adrenalin was replaced by the speed and emotions she got to experience while driving a go-kart there. Magdalena Kuziak reached the finish line after Matela and Graban in the first race; the assistant coaches exchanged first and second place in the second run while Justyna Lukasik finished in third place.

“Though Piotrek and I finished first and second, the girls were really sparkling. Natalia and Magdalena were the ones who got most goose bumps and I think this is because they are young and they do not have that much experience even driving a car” Graban said.

“It felt like being a Formula 1 driver and I think I was not that bad because in the end I finished third and fourth” Kuziak shared. “I enjoyed it a lot as you can forget about everything and simply focus on the race. It was my first but surely not last time; I even do not have a driving license yet. We have some bruises but it was well worth it”.

Though it was not an ordinary training, it was a good experience to develop reaction skills as well as all muscles as the girls had to control the kart and resist to some small G-forces. In the end there were no injuries and the Atomic girls left the stadium ready to focus on their test match with Siodemka Legionowo coming up later in the week.