In a memorable match worthy of stakes that were put up in front of this two teams, Venezuela won a fantastic five setter against the home team Colombia and reserved ticket for the 2014 World championship in Poland. ”Coliseo Polideportivo Sur de Envigado” was packed with the capacity crowd who made this game even more special. 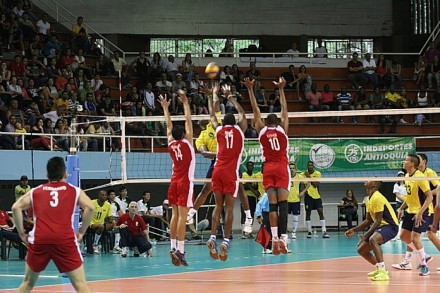 Venezuela’s block, too strong for Colombia

Game itself started good for Venezuela who took 8-3 advantage but almost gave it up until the second technical time out  14-16. Atmosphere fired up after the four unused set points for Venezuela but home crowd got silenced after 27-29 and lead for Venezuela.

Even fight continued in the second period, score was even over five times but Colombia somehow succeeded in maintaining the minimal lead and tied up the score at 26-24.

After another tight set it was time for one-sided one. After hanging in untill 8-11, Colombia was in for it, but couldn’t sustain the pressure. Venezuela was in front again with the easy 17-25.

All of a sudden there was a world of pressure on home team to win this ”do or die” set. And they did just that. By amazing effort in defence, Colombia gave those loud fans a hope of winning after a stellar performance in the fourth period, 25-19.

And there was no better way to end this amazing high pressure game then in a tie-break. Colombia couldn’t coup with the tension. Venezuela started with the 2-5 lead and looked just a step away from Poland. But heart and spirit of the crowd affected the Colombian players who draw the level at 11. There was no separation from that moment on. At 14-14 Colombians failed to execute their attacks and counter attacks and the final spot for South America in Poland went to Venezuela, 15-17.

Check out or World Championship 2014 section, as well as the latest news.