POL W: Atom Trefl and Tauron to battle for bronze

Atom Trefl SOPOT won’t have the chance to go for a hat-trick in Poland women’s national league after the team lost the last game of the semi-final series with Impel WROCLAW by 1:3. This means the Atomic girls will now fight for bronze and take on arch-rivals Tauron Banimex DABROWA GORNICZA while Impel will play national cup winners Chemik POLICE in the Championship series. 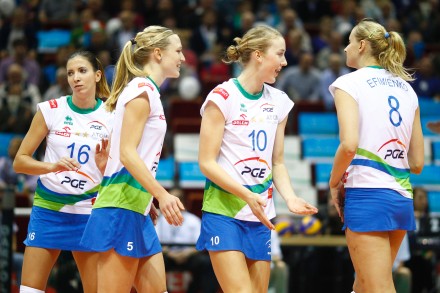 “We still have the chance to win a medal and we will do everything we can to finish among the top three in our country,” says wing-spiker Klaudia Kaczorowska. “The fact that we are playing the so-called small-final testifies that the level of our national league has become much higher than it was only a year ago. This is also an additional reason to fight for bronze and finish the season in third place. I do not think that the season is gone already, we still have one more battle that we want to win,” she adds.

“We are very angry and disappointed after the matches we played with Impel,” stresses Atom Trefl libero Mariola Zenik. “We had set very high goals at the beginning of this season but we did not reach any of them. We are still hungry for success and we want to prove something to ourselves and to our fans too. We have this series of matches ahead and at the end we want to be those standing on the third step of the podium.”

SOPOT and DABROWA GORNICZA were also Poland’s representatives in the 2014 CEV DenizBank Volleyball Champions League where the Atomic girls reached the Playoffs 12 losing to eventual silver medallists VakifBank ISTANBUL while Tauron failed to make it through the prelims finishing fourth in Pool F.