Not Mikko Esko, not Nikola Grbić, and not Luciano De Cecco. Who will change Miguel Falasca in PGE Skra Belchatow? 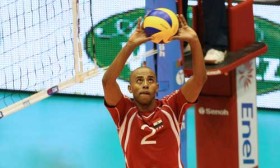 After the failure in the Championship of Poland, Skra Belchatow decided to change its style and Konrad Piechocki (the president of Skra Belchatow) did not updated a contract with Miguel Falasca. Then, Piechocki moved in search of a new setter. However, he would not ever assume it will be so demanding task.

Already during the finals of the PlusLiga, it was said that Skra will be looking for a new setter. The first name, which appeared in medias, was Mikko Esko from Casa Modena. As it turned out, he had rapidly signed a contract in Russia just after the end of Serie A season. A consecutive candidate to be a new creator of Skra’s style was Luciano De Cecco. Unfortunately, it occurred that he has a protracted injury of his finger and after the Olympics in London, he will have to undergo a surgery. Recovery from the surgery will take approximately 3 months. Skra could not afford to occur for so long time without his vital player like the setter. In particular that they will play in the Club World Championships in November. Hence, Piechocki has begun hunting again. Another aim of Skra was a outstanding player of Serbia – Nikola Grbić, but he also not accept an offer from Belchatow and he made up his mind to stay in Italy – Cuneo.

In spite of having problems with bringing a new playmaker, Konrad Piechocki is still optimistic: As you can see the situation from Falasca (he was signed by the richest team in the world – Ural Ufa), the market is not filled with great players. For now, we have Pawel Woicki, who is able to play at a high level. We are talking with several players, but do not want to make any nervous transactions – Piechocki said.

One of candidate to play in Skra is Ahmed Abdalla. The Egyptian is the best African setter who is the strength of his national team along with Ahmed Salah. Abdalla spent last season in Al Ahli Kair, but he previously was playing inter alia in Sisley Treviso and Gabanca Montichiari. He presents very offensive style. Moreover, his undeniable advantage is his growth (198 cm, 352 cm reach in attack, 331 cm reach in block) and extremely strong serve.

It is said that Skra is also interested in Dejan Vincic (Volley Lublana) and Yoandry Diaz (Cuba National Team) who gain permission of Cuban Federation to play foreign.