World No. 4 Poland claimed their first ever World League title following an exhilarating 3-0 (25-17, 26-24, 25-20) win over Olympic champions USA in the final of the 2012 FIVB World League on Sunday at the Arena Armeec in Sofia. 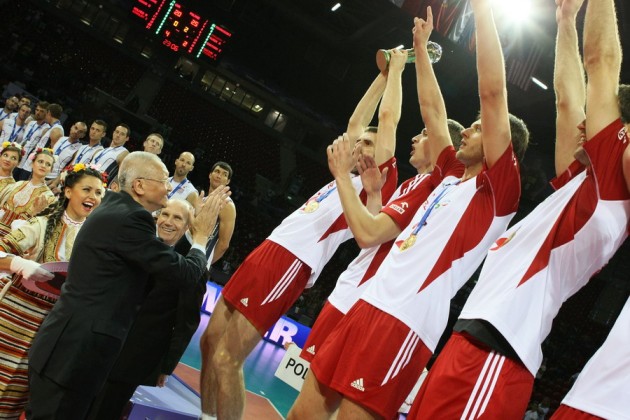 Last year’s bronze medallists, in their first ever World League final, were in devastating form passing through pool play at the Finals unbeaten – this after having only lost two matches in the Intercontinental Round – dropping only two sets against Brazil before beating the hosts Bulgaria in the semifinals in straight sets and then winning the World League trophy and the $1m prize.

“I am very happy, it is a historical moment for all of us,” Poland captain Marcin Mozdzonek said. “We won against one of the best team in the world, USA. I hope we will continue playing this way.”

The 2012 World League is Poland’s first international title since the 1976 Olympics, which adds to their 1974 World Championship crown. Since coach Andrea Anastasi came on board after a 13th place finish at the 2010 World Championships, Poland recorded their previous best ever World League result at last year’s edition finishing third, before claiming bronze at the European Championships and silver at the 2011 World Cup. Anastasi has now won five World League titles – two as a player for Italy (1990, 1991), two as a coach of Italy (1999, 2000) and now one with Poland.

Zbigniew Bartman top scored with 16 points, followed closely by tournament MVP Bartosz Kurek with 15 as Poland improved their record against USA to 14:10 with two successive straight set wins following their 3-0 victory at last year’s World Cup. It was the first time the two teams had met in a final of an FIVB competition.

For USA, a repeat of 2008 when they won the World League and Olympic titles did not happen this time but the silver medal – which adds to their one gold and two bronze to become the fifth most successful country in the World League behind Brazil (16 medals), Russia (14), Italy (13) and Cuba (9) – was impressive considering the start of their World League campaign when they lost three matches in a row.

“I thought, in the beginning of this tournament, that our team would not be in this position, but our play improved,” USA captain Clayton Stanley said. “I am disappointed for losing the final match, but we will see what we did wrong and learn from our mistakes.”

ITA M: Morelli “I’ll give everything I have”