Pawel Zatorski, Pawel Woicki and Wytze Kooistra visited oncology patients in the Mother and Child Institute in Warsaw. Children talked about volleyball with great interest with the volleyball stars. 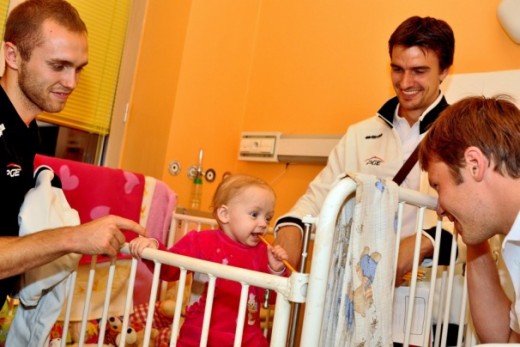 “They asked us, among other things, what you need to eat to be so tall” Wytze Kooistra said,  he is 209 cm.

Volleyball players also specially prepared for their tasks: Wytze Koositra (representing the Netherlands) read children’s stories in Polish, and Pawel Zatorski and Pawel Woicki had to prove their fitness with close eyes, while making sure not to break the chicken eggs .

Heroes Foundation players again and again burst out laughing, with the children rewarding them with applause! The parents and medical staff also joined in the joyful visit.

“I really was very happy. Sometimes, of course, I had moments of deep thought, but I will say that the visit is a positive thing” Pawel Zatorski said after leaving the hospital.

“I am glad that I came here. I did not expect that such a visit could bring so much joy. Still, I wondered how is it possible that these children suffer from this terrible disease!” Pawel Woicki said.

This visit was another joint initiative of PGE Skra Belchatow and Heroes Foundation, which co-operate since 2009. Volleyball shirt was given to that was signed by all the players. It will be sold at an auction and the funds raised will be used to help the patients.

POL M: Jacek Nawrocki – We need to improve the quality of the game

PHOTO OF THE DAY: Lisinac in new...