POL M: Quick round in PlusLiga 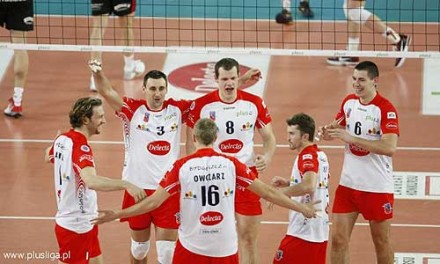 Only one match lasted longer than three sets. Zaksa Kedzierzyn-Kozle began this season at home with AZS Warszawa. Guests  showed some good skills in reception and offensive. They were a strong leader during whole first part and won this 25:19. Zaksa got a little mad about this, so they decided to make a powerful start (4:0). AZS kept loosing for the first half of the set, but than they were brought back at 17:17. Jurij Gladyr saved the day for Kedzierzyn and helped to win this part 25:21. The next set was also a little bit taugh, but with the final success of the hosts. In the last part, Warszawa didn’t really have much more to say, as Rouzier and his colleagues finished the job. Whole game was finished by Serghy Kapelus, who scored an ace.

We didn’t do our best today – admitted Pawel Zagumny – we had ups and downs, but it’s just a beginning and I hope we will play better and better every time.

Jakub Bednaruk, new head coach of AZS, added: we lost our patience today. However, I am very proud of my team, of what they showed today. I’m convinced that with that quality we can beat Jastrzebski Wegiel next week.

The rest of matches were very quick and not really emotional. Asseco Resovia started a bit nervously, but it was only for a moment. They beat AZS Olsztyn 3:0 (25:21, 25:22, 25:17) and MVP was Wojciech Grzyb, who had 100% efficiency of his attack. Radoslaw Panas, head coach of AZS said pretty much the same as Jakub Bednaruk: “Resovia was to strong for us, but I think we did all as we can and there is no shame in loose such a game.“

Delecta Bydgoszcz had no bigger problems with win over AZS Czestochowa, which is in this year very young and inexperienced (except for Dawid Murek, the capitan). Hosts finished this game in 75 minutes (25:18, 25:20, 25:21) and Dawid Konarski has been chosen MVP. Murek said a few words on the press conference later on: “I believe we will do better with every week. As you can see, we are very young and this game was a big deal for most of us, which is related to a great dose of stress.“

Effector Kielce met with Jastrzebski Wegiel and they were able to stay strong only in the second set, where they kept catching up their rivals, but in the end there was 27:25 for Jastrzebie. With three new players (Czarnowski, Martino and Wojtaszek on the libero), Lorenzo Bernardi made the first victory of this year. He was very happy and relieved about this inauguration.”I am very satisfied, because this week brought us some issues and we could not train all together. My team proved that we are going to play for medals this year.“

Skra Belchatow was playing on Sunday as a host with Trefl Gdansk. Visitors made a huge number of mistakes and it was not particularly a great show. Skra ended this game shortly (25:20, 25:22, 25:16, MVP Michal Winiarski) and now they are preparing to another, much more difficult meeting with Resovia Rzeszow. This game of the second round is planned on Tuesday already, because Belchatow is going to participate in Club’s World Championships, which interrupt and complicate the standard calendar of PlusLiga.

TUR M: Ivan Miljkovic still got the fun of playing