WCHJ M: Russia’s strong services and blocks too much for Venezuela 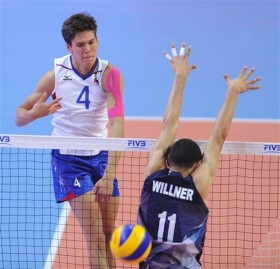 Russian coach Mikhail Nikolaev started the match with the best players and after he won the first set he started to use the substitutes gradually until he used entire squad by the end of the match. “Zbornaya” put a pressure through the service in the first set where the Venezuelan receivers couldn’t react properly.

Russia continued using the same strategy in the second set with the coach starting to mix the team, but they easily won the set 25-20.

Venezuela started to get more and more confidence in the third set where they fought hard to stop the Russian attacks beside arranging their combinations using the outside hitter Roberth Abreu who scored the crucial points to win the set 25-22.

The Russian coach returned in the line-up his first opposite Victor Poletaev who again sent his sharp services aiding his team to come back with a fourth set victory and finish the match at 3-1 mark.

Russian middle blocker Ilyas Kurkaev was his team best scorer having a tally of 17 points including 5 killing blocks and 4 ace services, followed by Egor Feoktistov who scored 15, while one of the competition best scorers Victor Poletaev contributed only with 11.

From the Venezuelan side Roberth Abreu recorded 14 points, followed by Willner Rivas who scored 11.

See the WoV Community profiles of Junior national teams of Russia and Venezuela.

WCHJ M: India secured their spot in Round of 16

Spirik got yellow card BEFORE match, he...