Dinamo had a good start of the match which included successful attacks of Veres, Pavlov and David Lee. 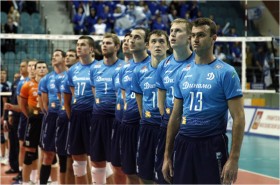 Leading from the start Moscow went to the first technical timeout with a significant advantage of 7 points.

Dmitry Sherbinin and Lee scored aces, but on the other side also were good Tyutlin and Tatarintsev. Peter Voros, who played a combination of “entry into the zone” closed 1. set with 25:19 in favor of “Dinamo”.

At the beginning of the second set two teams were equal and played point by point.

Thus, teams went to the first technical timeout after the attack of Grankin 8:7. In the middle of the set instead of Gumenyuk of Lomomotiv entered Storozhilov.

In that way the coach has changed the style of playing in his team. Lee supremely played in the service and then together with Veres in the block. In the key moments of the game stood Grankin and Kalinin and on the other side,

Yuri Cherednik played great in defense. The result of 18:15 turned to 23:16. The second set was finished with the attack of Nikolay Pavlov.

The third set began unexpectedly for “Dinamo” – the first three points were scored by the guests. Lee was great in the attack together with others.

After Yuri Cherednik evened the result to 22:22 Dinamo twice played great in defense. Pavlov and Kalinin were perfect in the attack.

Actually, Nikolay Pavlov put an end to a tricky match, closing the set with 25:22 and the match 3:0.