WCH W: Sokolova does not rule out World Champs comeback

Another “grande dame” of Russian women’s Volleyball, Lioubov Shashkova (Sokolova), has expressed her intention to join the ranks of the national team for the upcoming FIVB Volleyball Women’s World Championship Italy 2014. Sokolova, who is a double world champion and also a two-time Olympic silver medallist, may follow in the footsteps of Ekaterina Gamova who announced her comeback some weeks ago, with – at least for the time being – her commitment being limited to the World Champs in Italy. 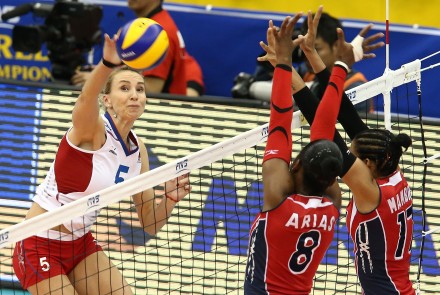 The President of the Russian Volleyball Federation, Stanislav Shevchenko, has stated in an interview to the ITAR-TASS news agency that Sokolova may come back for the tournament scheduled for September 23 to October 12 in Italy. The 36-year old Sokolova was a member of the Russian national team also at last year’s FIVB World Grand Champions Cup in Japan but had initially ruled out her availability for the World Championship. She is now on the extended roster submitted by head coach Yuriy Marichev for the real highlight of this year’s Volleyball calendar.

Without the likes of Gamova and Sokolova, Russia claimed bronze at the FIVB World Grand Prix Finals held last week in Tokyo, Japan, thereby turning into the best European team in the competition won by double Olympic champions Brazil.

“Lioubov has given her consent to join the national team but she still has some physical problems and if they are solved, she will be in the team for the World Championship,” Shevchenko said.

Gamova, on the other hand, will join the group in the coming days once the first stage of their World Championship preparations will get underway at the premises of the Volley Grad in Anapa.

2006 and 2010 world champions Russia will try to complete a hat-trick of titles in Italy and start their campaign in Verona in a preliminary pool that also includes the likes of USA, the Netherlands, Thailand, Mexico and Kazakhstan.