RUS W: Any Olympic medal will be a success for the Russian volleyball players – Shevchenko

Hit in the top three at the Olympic Games in London will be considered a good result for the women's volleyball team Russia, said the agency R-Sport the president of the Russian Volleyball Federation (VFV), Stanislav Shevchenko. 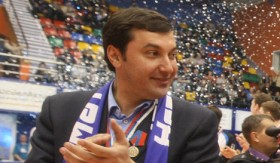 The Russians have made one hundred percent result in the qualifying tournament for the Olympic Games in London, which was held in Tokyo, giving a total of seven matches a set.

“I really like how the team worked in Tokyo. It’s been a long time since a national team was assembled like this one. I do not have any claims on the returns, nor the result of any situation that prevailed in the team. All things considered, situation was nervous, but the staff responded very well. If in London charge shall be the same for the victory, the same atmosphere, then I’m sure everything will be fine. normal result is to bring the award. Any medal at the Olympics – it is a success “- Shevchenko said on the phone.

According to the source agency, really uneasy at the qualifying tournament was only two games. “Despite the score 3-0 in the match against Korea was not easy. And Serbia have won the third set and was forced to include new momentum“, said the president of VFV.

Attacker Lyubov Sokolova did not go to the qualification Olympic tournament in Tokyo. It is unknown whether she will perform for the Russian team in London. “We have a team in the door is open to all. If she is willing to participate in the Olympics, she will participate. And if she wants to participate, it is best to ask her. I can not say anything for it. But in the national team to play a person who are want to play there. Our list start at 10 June, prior to that date will be known. While she thinks she has personal problems that I can not tell “, said Shevchenko, adding that before the June 10 national volleyball team will rest .

VFV President said that the other team leader TatIana Kosheleva would  likely to go to the Olympics. “Tanya is now in Germany for rehabilitation, she has a good mood“- he explained. – “Tatiana spoiling for a fight, but let’s see what it say from doctors. At the Olympics, I think she will be, but it is desirable that the maximum was in readiness.“