RUS M: León leaves Kazan – “I part my ways with Zenit in friendship”

It’s official – the Cuban volleyball player Wilfredo León will not play in Zenit Kazan in the 2018/19. 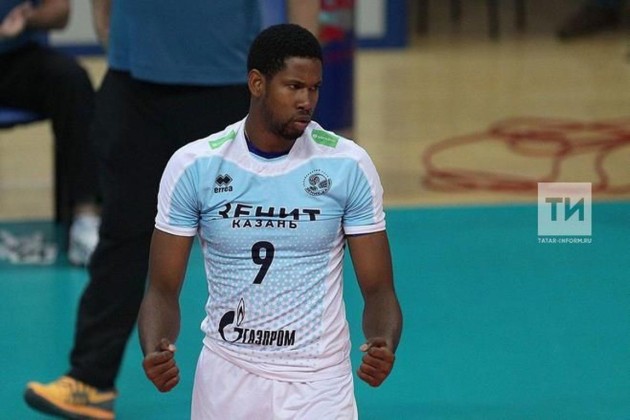 The Cuban outside hitter Wilfredo León, a two-time CEV Champions League MVP, addressed to his fans via Facebook and confirmed rumors regarding his departure from the Russian powerhouse Zenit Kazan after four seasons.

“I want to officially inform that I have decided not to renew my contract with Zenit Kazan. I would like to thank the club and the coach for creating the perfect conditions for my sporting development. In this wonderful club, I achieved titles that I was dreaming of – I won the Russian championship, the Russian cup, the Russian super cup, CEV Champions League, as well as the Club World Championship,” León posted. 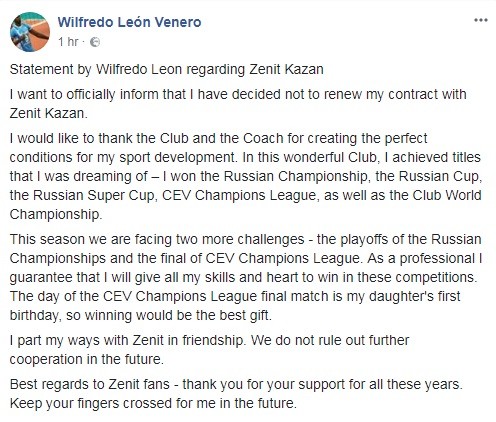 “This season we are facing two more challenges – the playoffs of the Russian championships and the final of CEV Champions League. As a professional, I guarantee that I will give all my skills and heart to win these competitions. The day of the CEV Champions League final match is my daughter’s first birthday, so winning would be the best gift. I part my ways with Zenit in friendship. We do not rule out further cooperation in the future. Best regards to Zenit fans – thank you for your support for all these years. Keep your fingers crossed for me in the future,” the scorer of 68 points in the CEV Champions League added.

The statement of León came the same day Frenchman Earvin Ngapeth revealed he will sign with Zenit.

Although he did not reveal the name of the club for which he will sign for the next season, the Italian Sir Safety Conad Perugia have the best starting position for now.

You won’t believe how old is a setter that competes in Italian Division 2!

and Leon to Perugia, which is really not a secret. right?

Re: @suisse
Should be like this. But I don’t believe in 1M contract…

Re: @Axe
no no…Italy isnt there yet. quality of life, son and a little more fun I suspect. I would say in the 7 to 800 ,000 with perks.
Perugia would put itsself in a bind and needs to resign Russell with a hefty hefty raise next year

Re: @suisse 800.000€?! Never heard anybody in Italy has ever had this sum. Maybe Zaytsev? Than the budget of Sir would be almost 5M which I truly don’t believe

Re: @Axe
you make want to look into what Ivan is making as well as Atanasijevic. Both are north of 600,000 . Ivan wants to play opposite correct but heck if he wanted to stay another year if Leon doesnt come that would be cool. He is playing well and seems happy.
It should be fun to see how this all works out.

I wouldn’t be surprised if he replaces Leal in Sada Cruzeiro who allegedly will move to Lube.
I don’t think Perugia can afford Leon especially with the rule of at least 3 Italian players to be on the court at any given time. Perugia has already Podrascanin, Atanasijevic, De Cecco, Rusell and Berger which means Leon would be sixth foreign player and only 3 of them can play at the same time. Podrascanin, Atanasijevic and De Cecco are always playing so it will be the tough situation.
Lube will be facing the same problem if they bring Leal without getting rid of one foreign player, likely Stankovic as his prime time has passed and he is the oldest in the team.
Don’t forget Modena since Ngapeth is taking Leon’s place in Zenit, and Trentino has very disappointing season so they have to strengthen their roster.

Re: @former_player I don`t think Sada Cruzeiro can afford Leon. Maybe PGE or Zaksa can.

Brazil? That would be reasonable if its not 10 000 km away from Poland.
It is between Italy or a very rich Polish club. Heynen is making preparations for the white and red. If he plays in Brazil that would become a logistical nightmare for the whole PZPS before the qualification tournaments for the Tokyo Olympics. He should be nearby Poland in order to train with the national team.
He should rather stay in Russia if distance is not an issue. It wouldn’t have been a problem if he was with the team for a long time.

Zaytsev does not want to stay in Perugia simply because he wants to be the star of the team, but if Leon comes he will be the star. Next season Cruzeiro and Kazan will be weaker without the Cubans, and Lube with Leal/Bruno and Perugia with Leon/Atanasijević will be main contenders for CL and CWC. So why Zaytsev would not want to finally win a CL or CWC? Because being the ‘star’ of the team is important for him.

Re: @Pope He can be star of the team in many teams, but no team will give him contract like he has now in Perugia

Re: @Axe Like Mikhailov(yes Maxim Mikhailov) have said in the past… Zaytsev gets that kind of money not only from his club but also with his advertising campaigns. He doesn’t need Perugia to give him that money when he can make it on his own. He’s the star of the national team and that’s how he gets that.