This past season Jovana Brakocevic debuted in the CEV Volleyball Champions League and as she represented the likes of Vakifbank ISTANBUL the 196 cm tall Serbian opposite player enjoyed a memorable campaign topped by the gold medal and MVP award she received at the final four tournament in Turkey’s megalopolis. Read latest volleyball news on Worldofvolley.com. 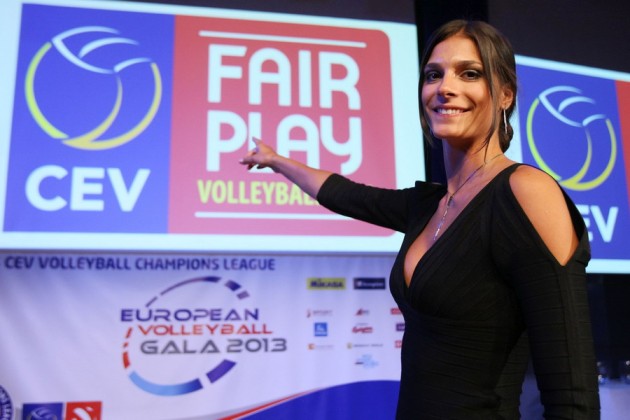 This past Friday Brakocevic – the Most Valuable Player from the 2011 European Championship and the European League that same year – was among the stars who were awarded in Vienna as the UNIQA Tower played host to the annual European Volleyball Gala. She graced the night with her beatuy and black dress that was especially drawn for that ceremony in Austria’s capital city. She just looked fabulous and was the first player to appear on stage as the show was aired live on ORF Sport+.

“I was supposed to be the third player to be awarded but everything changed at the very last moment“ she recalls. “I was a little bit nervous because I was sitting together with the greatest stars of our sport and next to the highest-ranking officials. However, the ambiance was great and I felt very honored for being in such a company.“

Jovana looked charming as she was called on stage by Austrian anchorman Michael Berger and received a warm applause by the audience. “I was told he was going to ask us a question but he probably got confused and mesmerized at the same time as he got to see a 200 cm tall girl on high heels. He eventually asked me to move down the stairs so that we could take a photo together. Everyone in the room laughed and applauded. Afterwards, once the live show was over, he came to me and he apologized for he hadn’t asked any question to me. Anyway in the end it was a very funny situation.“

Brakocevic would like to share the award she received in Vienna for the „Newcomer of the Year“ with some people who accompanied her along this triumphal campaign. “Though this is meant to be an individual award, I have to say that some 20 people have to be given credit for it, i.e. my teammates, the coaching staff and the management of Vakifbank. And of course also my family because everything when it comes to my Volleyball career got started there“.

Since she had traveled to Vienna from Slovenia where she was attending a training camp with the national team currently preparing for the FIVB World Grand Prix, none of her relatives – including boyfriend Marcello – could attend the Gala. “It does not bother me because we will surely have the opportunity to celebrate this award. I was in touch with my loved ones before, during and after the Gala. I feel sorry that they could not attend but there was no other chance for I came from Kranjska Gora and returned there right after completion of the Gala“.

On Saturday morning she got back to Slovenia and resumed training with the group. “My trip had started at 4 am. I first got to Vienna, attended the ceremony and the DOL, and the next day I flew to Ljubljana where a driver was waiting for me to travel back to our training base“.

Together with six other stars of the sport – Malgorzata Glinka-Mogentale, Marketa Slukova, Julius Brink, Wout Wijsmans, Osmany Juantorena and her countryman Vladimir Grbic – Jovana also attended the official launch of the “Fair Play. Volleyball Way“ campaign that CEV unveiled on Friday night there at UNIQA Tower.

WL M: Serbia hoping for a two victories against Italy