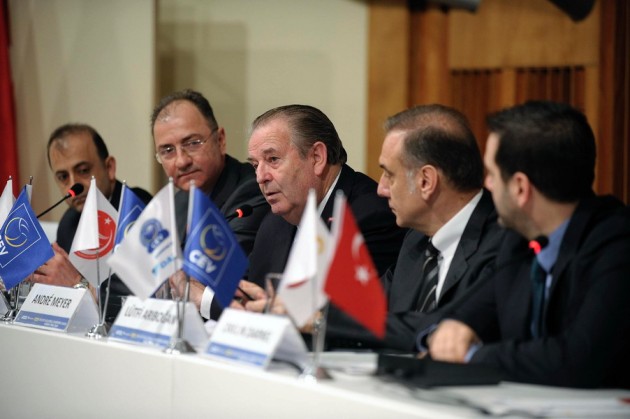 CEV President André Meyer was very happy to welcome journalists and TV stations from all over the world, ready to cover CEV’s most important club competition. The CEV President was pleased to inform the audience about a series of developments that are envisioned for the years to come in order to set up a global vision of the sport and especially the marketability of the CEV Volleyball Champions League.

Meyer said that representatives of a few clubs participating in the CEV Volleyball Champions League recently got together for a special working group to submit their proposals and ideas for a bright future of Europe’s most prestigious club competition. He was extremely happy with the pro-active attitude showed by the clubs and insisted on the necessity to carefully study their various proposals. The CEV President informed as well about the new “golden set” rule being introduced for next season, as the “three-point-system” will be used to determine the final score of the home and away games. As a consequence, a golden set will only be played in case of a tie in points (3 for a 3:0 win, 2 for a 3:2 win, 1 for a 2:3 defeat and 0 for a 1:3 or 0:3 loss).

Özkan Mutlugil, the President of the Turkish Volleyball Federation, felt privileged to be hosting the Final Four that was undoubtedly “a world on its own among the European Cups”. He extended his gratitude to the European Volleyball Confederation and its President André Meyer for entrusting Turkey with this prestigious organization. He warmly welcomed all of the participating teams, the journalists and fans from all over the world and was sure they would turn Burhan Felek Volleyball Hall into an “Arena of Festival” by creating a wonderful atmosphere in closely contested matches.

Lutfi Aribogan, CEO of Galatasaray, proudly welcomed the teams, officials and press members to Istanbul and told the audience about the tradition of Galatasaray sports education. “For many years, Galatasaray has been known as a club which raises his own players. It recruits players when they are high school pupils and it raises them for Turkish sport. Although in the past years the team had to step back due to the transfer of international stars by other teams, the results of this investment showed its effects through the achievements obtained in recent years.”

Finally Hasan Önder, the President of Daikin, handed over a nice present to the captains to celebrate today’s international women’s day. The 2013 CEV Volleyball Champions League Final Four – Women is powered by Daikin.