EL W: Turkey made three wins in a row

Turkey completed a clean sweep of their home matches in Bursa for the first round of action in Pool A of the 2013 CEV Volleyball European League – Women. The home side stormed back from two sets down to eventually edge Bulgaria 3:2 in a game that looked already compromised for the young players mentored by Mehmet Bedestenlioglu. In the other match of the day Hungary could score their first win in the competition seeing off Romania 3:1. 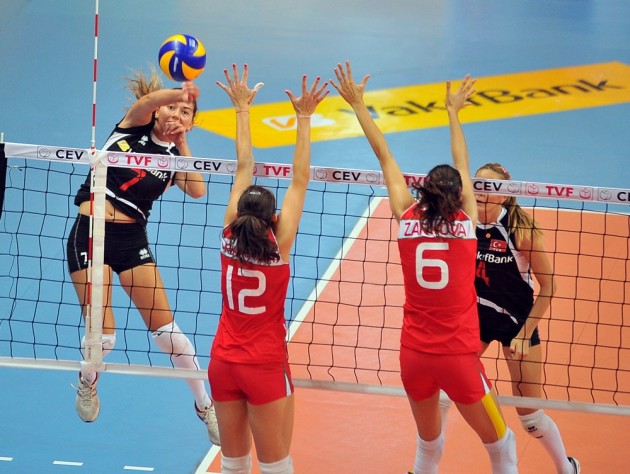 With this result Turkey keeps the leadership in the standing of the group with three wins in as many matches.

Bulgaria caught a very good start in their game with Turkey going quickly up 8:3 and even though the home coach asked for a time-out, the guests sped up to move ahead 12:4. Though she tried to anchor her team, setter Asuman Karakoyun could not change the course of the game and Bulgaria pocketed the first set with the massive score of 21-7.

Things got better for Turkey in the second set especially with good serving (12:9); however, Bulgaria fought their way back to even the score at 12 all and after that dominated the scene for another imposing 21-13 and the provisional 2:0.

Turkey was paced by good blocks and serving by Fatma Yildirim to make it 4:1 in the early phases of the third set and after a tie at 8, the hosts got the lead once again at the technical time-out (12:9). Still Bulgaria flipped the charts around (17:14) and the final rush of that set was really dramatic. In the end with Uslupehlivan and Yildirim on fire, Turkey sealed the 26-24 that prolonged the game to a fourth set.

Turkey could not stop Bulgaria’s star Elitsa Vasileva in set 4 with the guests going up 12:8 before Turkey – once again helped by Uslupehlivan and Yildirim – evened the score at 14 all. With the blocks killed by Gamze Alikaya and Büsra Cansu plus some more points scored by Yildirim, Turkey sealed the 21-18 that called for the tie-break.

Turkey caught a flying start there (5:1) and as teams changed sides, the hosts were leading 8:4 with Uslupehlivan and Birgül Güner setting the tone for the local heroines. Turkey did not lose focus and could finally celebrate a come-from-behind win at 15-9 for the joy of 2,700 fans.

Uslupehlivan top scored in the end with 23 points while Yildirim added 11 to the count of Turkey. On the other side of the net, Vasileva registered 17 for Bulgaria, while Dobriana Rabadzhieva got 16 and Hristina Ruseva 15.

“I am very happy with the result of this leg here in Turkey. The key thing for us is to qualify for the final four. We still have 12 more matches up to the final stage of the competition but we need to get the ticket to Varna” says head coach Mehmet Bedestenlioglu. “We are going to improve for the next leg but nevertheless congratulate all of my players”.

PHOTO OF THE DAY: Ballerinas or volleyball...