The hosts of last year’s Final Four Tournament, Galatasaray Daikin ISTANBUL, want to move on after last week’s defeat to Italy’s rookie Prosecco Doc-Imoco CONEGLIANO where they missed out on three match balls before losing 16-18 at the tie-break. 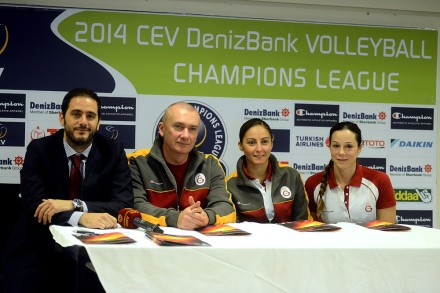 On Wednesday Galatasaray Daikin will try to get back on track and make a step forward in their quest to make the Playoffs 12 of the 2014 CEV DenizBank Volleyball Champions League – Women. Their task won’t be less demanding than last week for they play the star-studded team of Azeryol BAKU. Galatasaray will also line up a starting six that includes the likes of many great players, such as setter Eleonora Lo Bianco, libero Nihan Güneyligil, wing-spikers Stefana Veljkovic and Neriman Özsoy as well as Colombian opposite Madelaynne Montano.

“We do know the value and strength of Azeryol and even though this game is not going to determine the final standing of the group, yet it is extremely important” says Galatasaray Daikin head coach Massimo Barbolini.