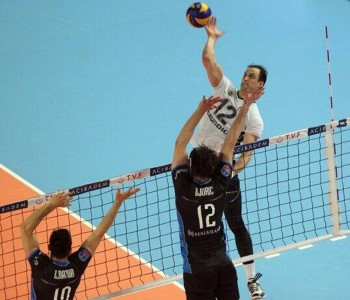 As expected the finals has begun with lot of excellent moves and inevitable tension. Players of both teams often used the pause between points to talk with the referees, and the “noisiest”one was Matey Kaziyski. Bulgarian had a lot of complaints because of some calls, so eventually received a yellow card as the final warning.

But, to put volleyball in the main picture let us write that the most credits for victory of Fenerbahce must go to Felipe Fonteles. Brazilian was just amazing, both in attack and serve. His ace finished the third set, and his spike ended HalkBank’s streak of points in the fourth set, when away team got close on 20-18.

Eventually, it was again Felipe Fonteles who made another ace and put an end to this game. He scored 19 points overall, but the most efficient player in home team was Ivan Miljković with 29 points!

On the other side, Kayizski made 22 points, Djurić stopped at 17.

ITA M: Perugia has done it!

RUS M: Ashchev will miss rest of the season