HalkBank has won all three points against Tours, but it could have been different. 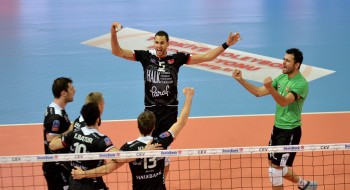 French side tied the game at 26-26, but Nuno Pinheiro then made a big mistake. He celebrated the point with unsportsmanlike gesture and received a red card, while HalkBank got a point (27-26). Already in the next play, home team made a block for 1-1 in sets. Everything afterward was a walkthrough for Ankara giant.

Tsvetan Sokolov was the top scorer of the game with 18 points, while Osmany Juantorena made 16. On the other side. David Konecny collected 14.

PGE Skra Belchatow was once again without injured Mariusz Wlazly, but nevertheless Polish powerhouse managed to overpower Tirol Innsbruck at home. Nicolas Marechal made 19 points for the winning side, while Facundo Conte added 14.

Precura Antwerpen seized a win in Czech Republic against Ceske Budejovice, mostly thanks to Marien Moreau who made 18 points. He was the only player on this game with double-digit number of points.

CEV CUP M: Arkas in next round with 33 from Schmitt, Trentino confident

EL W: Turkey gets closer to the...