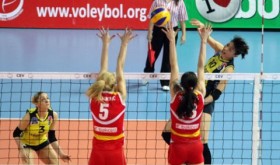 Yellow angels dominated game in the first set while being supported by passionate supporters and turned critical moments 8:4 to 16:8, although Rabita applied some substitutions, FB Universal finalized this part 25:20.

Rabita set a pace 6:8 in second set but local heroines bounced back to 10:9, guest team asked for a time out then. Tremendous struggle continued up to last whistle, host gained more points via opponent errors 29:27 and finished set.

Kim Yeong Keung was the top scorer with 20 points.

“We made many simple mistakes tonight. Today’s defeat is a consequence of our errors.” stated Rabita’s Serbian coach Zoran Gajic after the game.

Guest team’s US National player Kimberly Glass concluded, “We knew they have lots of talented players. They played better than us and won.”

FB Universal’s Brazilian mentor Jose Roberto told that, “When the opponent is stronger, we play better. That’s why we sometime have unforced errors against weak teams. We still need to improve our block and defense.”

Home team captain Seda Tokatlioglu explained, “This match was so important in terms of leadership of the pool. We kept our concentration from begining to end, finally we won. We got a rhythm whole team, that’s the key point of victory series.”

Turkey: “We got a good rhythm whole team”