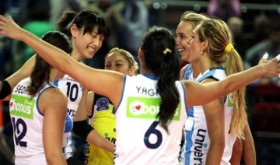 Both teams are the candidates of leadership in Pool B, great challenge is set to play in Burhan Felek Volleyball hall at 19.30 on Thursday, 15 December.

Turkish ladies occupy second place in group, now they seek for top against the strongest opponent.

Assistant trainer Kamil Soz, “Rabita Baku is the runner up in CEV Champions League last season and they clinched the title in Clubs World Championship at Qatar this year. They really have high quality players, so that, Rabita is one of the most pretentious teams in CL. Moreover, games at home and on road are also important for prestige. We will play to win those matches, the first one will increase our morale condition if we outpass them here.  I believe our fans will support us to make us stronger.”

Team captain Seda Tokatlioglu told that, “Upcoming match will be the hardest one against Rabita Baku. Rabita Baku is a good team, however we set a well rhythm. Our target is to win both matches and stay on top in the pool.”

Struggle will be played on Thursday, 15 December at 19:30, TRT HD will broadcast the game live.