Eczacibasi played perhaps the best game of the season and managed to defeat VakifBank in the semi-finals of the CEV Champions League! Bethania De La Cruz and Co. will therefore play in the big finals on Sunday against Busto Arsizio! 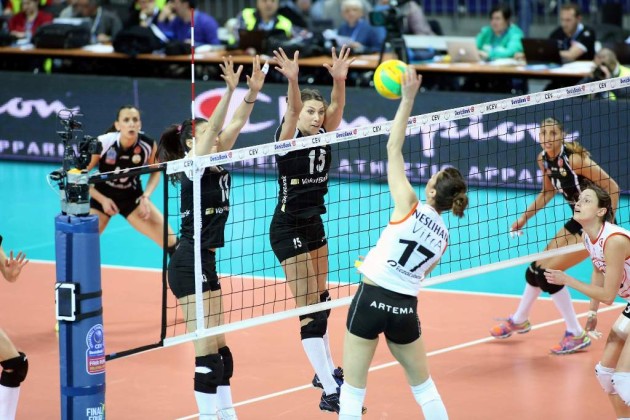 Eczacibasi had a really strong start of the match. Players led by Giovanni Caprara took an early lead at 4:0, while at the first TTO it was 8:3. The margin was increased to 19:11, when VakifBank finally woke up in this game. The reigning champion of Turkey managed to reduce the deficit to 22:18, and then to save two set points and to approach to 24:22… But, the third time was the lucky one for Eczacibasi. Bethania De La Cruz performed a powerful pipe attack and Eczacibasi won the first set by 25-22!

But, the answer of VakifBank was fierce. The second set was close only until the first TTO. It was 8:6 for the Giovanni Guidetti’s side, while then the margin started growing rapidly. With Gozde Sonsirma and Milena Rašić on fire, Vakif went ahead at 12:8, 15:9, 19:14, 23:15, and finally they seized the set by 25:16. The overall score was tied at 1-1.

The third set was very close. Eczacibasi took the opening lead. Jordan Larson scored for 10:6, and the margin remained the same until 13:9. VakifBank then scored 4 points in a row, equalized the result at 13:13 and had a chance to make a total turnaround. However, Sheila hit the antenna and returned the lead to Eczacibasi – 14:13. It was the start of a great run of Caprara’s girls. They escaped to 17:14, then to 22:18! It looked that everything was over. But, there was still drama in this set.

VakifBank once again managed to score 4 in a row and to tie the score at 22:22! But the same scenario hit the champions of Turkey. Players of Vakif made a mistake in defense and granted the point to Eczacibasi – 23:22, while then Maja Poljak stepped on the stage. Croatian player performed two big blocks! Firstly she stopped Carolina Costagrande for 24:22, and then Poljak blocked Sheilla for 25:22! Eczacibasi won the third set and took the lead by 2-1 in sets.

Girls led by Govanni Caprara continued where they left off in the previous set! They went ahead at 8:3, then at 12:7, while soon afterward it was 17:11! Eczacibasi was cruising toward the big finals of the CEV Champions League! And finally they have done it. Bethania De La Cruz and Co. had 5 set points – 24:19, they used the fourth one when Christiane Furst made a powerful attack from the middle.

Eczacibasi will play for the first ever Champions League trophy in club’s history!

CL W: Glinka-Mogentale for WoV – „Pressure was too big because we organized F4“