The management of Galatasaray was not satisfied with refereeing at Istanbul’s derby against Fenerbahçe Grundig, played yesterday, and issued an official note on this matter. 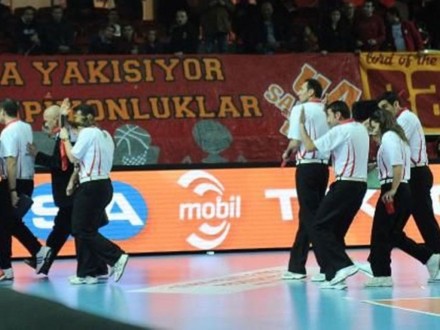 Galatasaray marked refereeing of umpire Bülent Bozkurt as scandalous and called him and all the other referees in Turkey to come to their senses when they make calls at Galatasaray’s games.

Galatasaray think that such a strong team and a team with big budget like Fenerbahçe doesn’t need to have help from referees and praised the amount of fight of own players in this match. “Still, it wasn’t enough just to beat the opponents on the court, but also to deal with other conditions”.

Galatasaray reminded Turkish Volleyball Federation that it was the same referee that showed four red cards and was swearing players of their men’s team in away game versus İnegöl Belediye, at the end of November.

Galatasaray emphasized that no one has the right to blow away a hard work of “14 players that had hearts like lions while fighting in the field” and that they want unbiased referee in their next game in Ankara, against Halkbank.

Recall that Galatasaray’s players had to protect referees from their fans on yesterday’s match which was full of tensions on the court and on the stands.