In spite of their defeat versus the “squadra azzurra”, the Russian powerhouse remain first in Pool II. 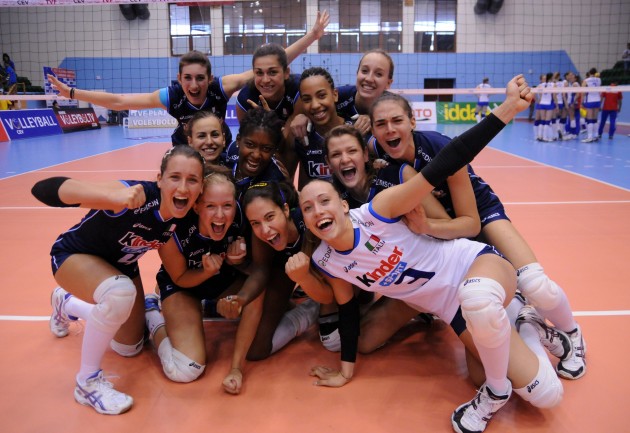 Russia needed only one set in first Pool II duel against Italy. On the other side, Italy was forced to win to keep their hopes alive for a possible semifinal spot. In a classy match, the “squadra azzurra” finally prevailed (23-25, 25-15, 25-23, 25-16) in their fifth and last preliminary match at 2012 CEV Junior Volleyball European Championship – Women. Italian middle-blocker Cristina Chirichella and Russian opposite Irina Voronkova topped the scorers with 17 points each. Russia made 14 reception errors while Italy only had six.

Both teams made an ambitious start into the game with Russia being a little bit quicker in defense. The Russian powerhouse led 8-4 and 16-13 at the technical breaks, but Chirichella leveled the score at 19-19 with a nice block winner. Nevertheless, thanks to a solid Irina Fetisova block, Russia managed to take a hard-earned 1:0 set lead (25-23). Italy bounced back strongly in the second period (25-15), but lost momentum again in the first part of set No. 3 (11-16). It needed an outstanding comeback of the young Italian talents at the end of the third set to turn the tables again. Wing-spiker Ilaria Maruotti finished the set with an ace (25-23). That was the key moment of the match. Russia didn’t stomach the unpleasant turnover, showing little resistance in the fourth and last set (16-25).

Italian head coach Marco Mencarelli: “We played very well today. Every player on the court gave its best. I don’t know why we couldn’t do so before, but this was the real Italian style.”