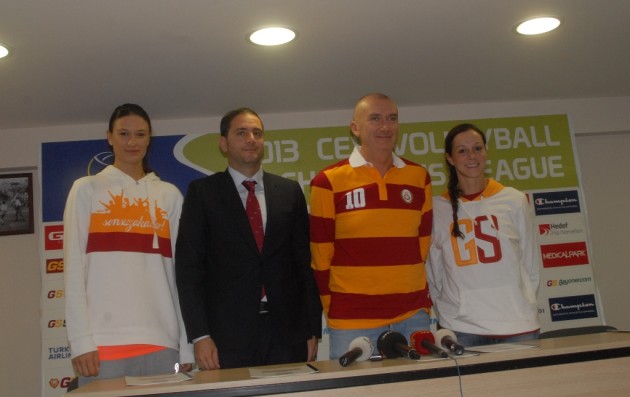 The event was held with the participation of the team manager Orkun Darnel, head coach Massimo Barbolini and team captains Eleonora Lo Bianco and Neriman Özsoy.

Three TV channels broadcasted the press conference live; several local interviews were given. At the meeting various local press members were also in attendance, most of them considered as great influences in Turkey’s Volleyball arena.

The most challenging and frequent question directed to all team representatives was if the preliminary pool will finish with Galatasaray atop of the charts. Mr. Barbolini said: “What we must do is to take it game by game. Each match has its own difficulties and they all bring points. So, instead of trying to set an extreme goal, we should focus on working hard and consistently.”

Eleonora Lo Bianco also stated that the first goal to achieve should be to complete the pool phase with good results. The manager of the team Orkun Darnel on the other hand pointed out that Volleyball went through difficult phases in Turkish sports history and that now the club is competing in such a major event. Thus Mr. Darnel considers the competition as a step to develop Volleyball in Turkey even further and as a huge opportunity to represent the country internationally. He also expressed his feelings saying: “We’re really excited to be one of the participating teams; after last year’s CEV Cup we’ll now have the chance to compete with Europe’s Volleyball elite”.