France’s ASPTT MULHOUSE claimed on Tuesday a spot in the semis of the 2014 CEV Volleyball Challenge Cup – Women as they followed up on last week’s away victory in Slovenia by edging past Calcit KAMNIK in straight sets (25-10, 25-12, and 26-24). Actually MULHOUSE had already started their party – together with about 3,300 home fans – after the second set for their 2:0 lead was already enough to secure their ticket to the semis where they most likely will be playing Russia’s Zarechie ODINTSOVO. 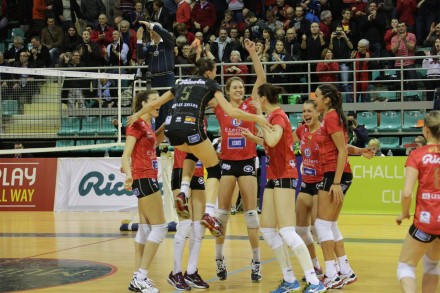 The score remained very close up to the first technical time-out of the opening set but after the break ASPTT MULHOUSE changed gear to lead the way 16:8 at the second mandatory stop. With their spikes and blocks Petya Tsekova and Iuliia Ferulik made sure the home side would firmly keep control over the game until the set ended in a terrific 25-10 for MULHOUSE.

The local supporters turned into the seventh player for ASPTT MULHOUSE and things were again very difficult for the young guests from Slovenia. Even though they fought bravely, Calcit KAMNIK could not stop the triumphal march of their opponents who celebrated their qualification to the semis after cashing the second set with another massive 25-12.

ASPTT MULHOUSE head coach Magali Magail could substitute some of her starting players for the third set but Calcit did not show any intention to surrender that easily. Magail had already stopped the game twice by the time his side was trailing 4:11 but the hosts finally got back on track by the second technical time-out where their gap was reduced to only two points (14:16). In the end, ASPTT MULHOUSE used their second chance to pocket a straight victory (26-24) and their performance was enthusiastically applauded by the 3,300 fans in attendance.

To read more news from this competition click on Challenge Cup 2013/14 W.

CL M: Bernardi and his “Hawks” going to Ankara!

Management of TIME OUT by Daniel Castellani (PART...

This is how to increase your vertical (VIDEO)

Exercises that will increase your vertical jump (VIDEO)

Middle blockers, you should try this drill (VIDEO)

Improve your skills with this stability and passing...

How to receive the ball with Aleksey...

Improve your skills with this stability and...