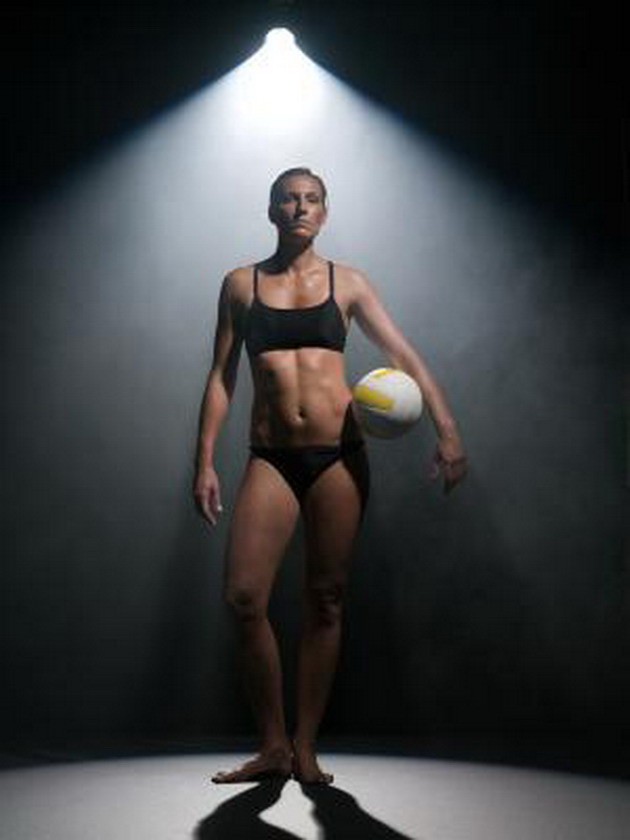 Jumping and agility drills are among the most important non-volleyball exercises because so much of the game relies on getting to the ball on defense and offense, and jumping to block a shot, spike the ball or serve. Because women athletes, soccer players especially, are prone to anterior cruciate ligament injuries, careful attention to form and the training regimen is strongly recommended.

Among the exercises that help boost power are bench presses, power shrugs, dips and hang cleans. To do a hang clean, start by holding a barbell or two dumbbells with your palms facing backward and your knees bent. In one motion, straighten the knees as you bend your elbows and bring the weights up to your shoulders, palms now facing outward. Try a circuit of these exercises, doing a set of 10 to 12 repetitions of each one, with a one-minute break between each set. To do a power shrug put as much weight on a barbell as you can handle and hold with your palms facing backward. Shrug your shoulders as you pull the weight up and then lower it 8 to 10 times. Dips require a dip bar or similar apparatus that allows you to hold onto two handles and lower yourself until your upper arms are parallel to the ground and then raise back up again for 10 to 12 reps.

Improving a woman’s jumping ability is essential in volleyball, whether she plays indoor or beach volleyball. Doing a variety of jumping exercises works the muscles at different angles, improving overall strength and stamina. To do a max jump pick a target height on a wall or basketball backboard and jump 10 to 15 times with both feet while trying to reach that target. Other effective jumping drills include the same-leg broad jump, in which you jump as far forward as you can by taking off and landing on the same foot. A third jumping drill is the box jump, in which you jumps with both feet onto a box or other raised platform. Women should remember to land softly and with balance and do weight training to strengthen the muscles supporting the joints. Repeat each set two to three times.

To start, set up four cones in a square pattern with each side about a yard long. Place a fifth cone in the middle of the square. The goal is to improve your quickness, agility and fitness level. Stand at the middle cone and hop on both feet to the upper left cone. Then hop to the upper right cone, back to the lower right cone, over to the lower left cone and up to the middle cone. Repeat the same pattern with only the right leg.

The fan drill requires three cones along the attack line, one at each sideline and the third in the middle. A coach or teammate calls out “right,” “left” or “center.” The player then must sprint to the appropriate cone, touch it and do a defensive shuffle back to the end line to await the next target. See how many cones you can touch in 20 seconds and work to improve that number.

The Women’s Dayton Club Volleyball program recommends a comprehensive set of workouts for members and other female volleyball players. Among the more unusual exercises is the “smash down,” in which women put a medicine ball over their heads, squat and smash the ball to the floor. In the frog jump, women squat with their arms straight in front of them. They then jump up and forward as high and far as they can.They repeat the drill every 30 to 60 seconds.

Check out our Stretching section. Every Sunday a new story. Tomorrow read about 10 Muscle Groups Every Volleyball Player Must Stretch.

POL M: Preparation for the 14th round