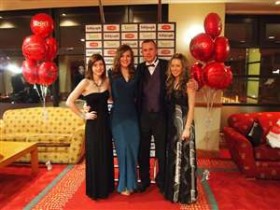 They were nominated by the Council and short-listed as one of 4 teams for the Northern Ireland Sports Awards at a glittering ceremony sponsored by “The Belfast Telegraph” newspaper in Belfast this week.

Head Coach Dr. Ian Walker said “It is a great honor to represent Dalriada school and Northern Ireland Volleyball amongst the sporting elite of our province. We had a great night rubbing shoulders with sports people who are feted by local press and media and this helped raise the Volleyball profile as we were given quite a few mentions on the night. The profile of Volleyball is certainly improving in Northern Ireland”.

Ian was joined by (pictured from left) Kathryn McCann, Caitlin de Jode and Sarah Craig but other members Nicola Cochrane, Kerry Kirkpatrick, Hannah Witherow and Northern Ireland captain Alice Harkness were unable to attend as they were playing for Northern Ireland on Malta in the 2012 CEV Junior European Championship where they finished a very creditable 3rd place behind Cyprus and Scotland.