Poland’s Zaksa KEDZIERZYN-KOZLE won agaist Noliko MAASEIK in the first round of the Playoffs 12 of the 2013 CEV Volleyball Champions League – Men. Brecht Van Kerckhove and Daniel Castellani commented the game. 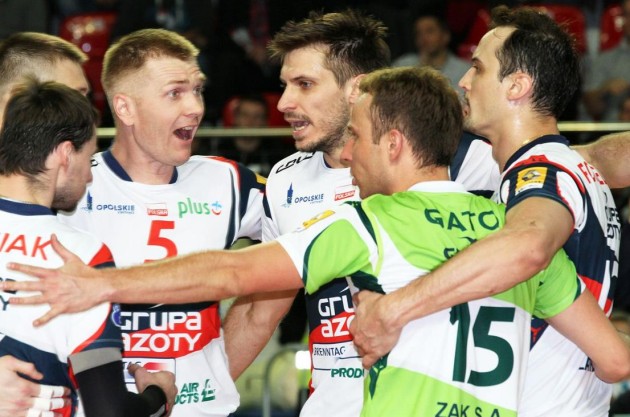 Zaksa started the match showing great determination and the right focus with Michal Ruciak and Antonin Rouzier scoring a few times to quickly move the score up to 6:1. The real supremacy of the hosts was evident also some minutes later as the scoreboard showed a terrific 11:3 for Zaksa and even though Belgian coach Brecht Van Kerckhove tried to stop that negative trend still the home side was leading the way 15:6 right before the second technical time-out. Noliko could fight its way back for a while but still not compensate for such disastrous start and Zaksa finished it off at 25-16 with a spike killed by Rouzier.

Noliko stepped up in the early phases of the second set especially from the serving line and Zaksa seemed helpless and unable to find a way to stand the serves by Simon Van de Voorde (6:9). After a time-out asked by their coach Daniel Castellani, the home heroes clawed back and even went to the front (16:14) after blocking Jelte Maan. A very close battle followed with Noliko missing out on four set balls before Rouzier – once more – sealed the last point for Zaksa (29-27).

Noliko caught the best start also in set 3 (8:6) but Luis Felipe Fonteles helped Zaksa storm back and draw level at 10. However, Noliko dictated the pace of the game also by the second technical time-out (16:13) before Zaksa stabilized their reception and could restore the balance. Jelte Maan received a yellow card by the first referee and this moved the charts up to 23:21 for the home side but Noliko was not yet ready to surrender, leveling the count at 24 all, before Fonteles wrapped it up for the joy of the local fans (27-25).

“I wish we had woken up a little earlier to stand the fight; tonight Zaksa really showed their class” said after the game Noliko mentor Brecht Van Kerckhove.

“I am happy with this victory but still we do expect a very demanding match next week in Belgium” concluded home mentor Daniel Castellani.