CEV CL M: Zenit and BERLIN to cross their ways once more after terrific showdown in first round 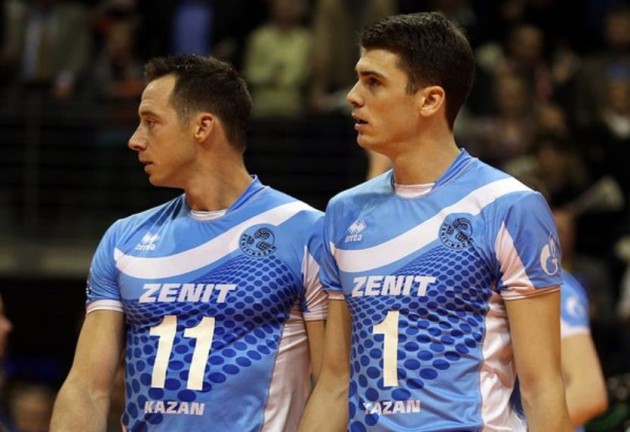 Right after their match in Berlin, the players of Zenit flew to Moscow where on Saturday they beat Iskra ODINTSOVO in straight sets, with Matthew Anderson (pictured, #1) registering more than 20 points for the second time this season.

“We had a very difficult match with BERLIN and I was afraid my guys did not have energy and focus to jump back into the national league but fortunately everything went well” says head coach Vladimir Alekno. “I would like to single out and praise the performance delivered by Anderson as well as by Evgeny Sivozhelez. These players are performing better and better as we progress through the season, so well done!”

“In Germany we had a tough time trying to stop Paul Carroll. He is left-handed and hence it turns out to be very difficult to adjust our block-and-defense system” stresses Sivozhelez. “However, we were able to regroup and find our rhythm. In the fifth set, particularly, we showed our strength. Our setter Valerio Vermiglio got a yellow card and we all got very angry but we managed to come back while trailing 7:10. In our home match we’ll try to play more aggressively so that we do not have to go for the golden set.“

BERLIN has an immaculate record in the Bundesliga with 15 consecutive victories and no defeats at all since the start of the season, the last dating to this Saturday as they beat VC DRESDEN in straight sets. A qualification for the Playoffs 6 would write history for this club as their best result so far in the competition is the participation in the Playoffs 12 dating back to the 2004/2005 season.

“We managed to give Zenit a hard time and I hope we’ll have more luck in Kazan” says spiker Robert Kromm looking forward to the second clash with the Tatars.