Zenit KAZAN and Dinamo MOSCOW are about to cross their ways in the Playoffs 6 of the 2013 CEV Volleyball Champions League as they share the goal to make it to the final four scheduled for March 16-17 in Omsk and where they would play their compatriots of Lokomotiv NOVOSIBIRSK in the semifinals. David Lee, Yuri Cherednik and Alexander Ambrosimov commented the game. 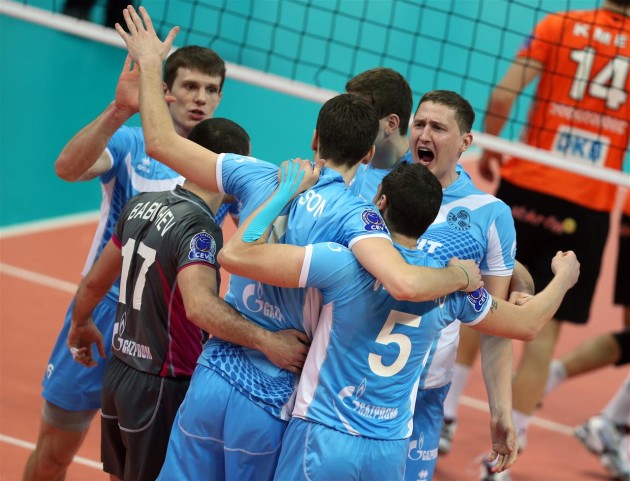 Teams from Russia’s capital city and Tatarstan have already contributed a classy derby also in the women’s competition where Dinamo KAZAN edged twice (3:1, and 3:2) Dinamo MOSCOW to advance to the Playoffs 6 and play there Rabita BAKU of Azerbaijan.

The men’s derby is expected to draw even more attention from fans and media even outside the Russian borders as the winners of last year’s CEV Volleyball Champions League – Zenit KAZAN – and CEV Volleyball Cup – Dinamo MOSCOW – are vying for a spot in the final four.

Zenit and Dinamo also starred in the last two Championship series of the Russian Superleague with the guys mentored by Vladimir Alekno eventually cruising to the title; however, this time Dinamo MOSCOW seems to be a very challenging and serious competitor as the guys around head coach Yuri Cherednik were additionally galvanized after edging the four-time club world champions of TRENTINO Diatec in the Playoffs 12.

The St. Petersburg sports hall in Kazan – which can host 5’000 fans – will be filled up to full capacity for the first round of this much anticipated showdown.

“After they claimed the first match with TRENTINO, it was clear that Dinamo could have had a real chance to make it to the Playoffs 6 via the golden set and they eventually exploited this opportunity. I am happy for my former team” says US–American middle blocker David Lee. “We shall not underestimate our opponents especially since Pavel Kruglov played brilliantly against TRENTINO. We shall stop him as well as Bartosz Kurek” he adds.

“Every year Volleyball is turning into a more and more tactical sport where technical skills and physical power are no longer playing a dominant role” says Dinamo mentor Yuri Cherednik. “Our matches with TRENTINO stand as a real evidence for this statement. We know we can play at eye level with the strongest teams in the world. Zenit KAZAN is probably stronger than TRENTINO but we are ready to fight.“

Back in 2011, as the final four was held in Bolzano, Zenit KAZAN beat Dinamo MOSCOW in straight sets in the semifinals before losing to TRENTINO but last year the guys from Tatarstan could eventually seize the trophy as they edged the hosts of PGE Skra BELCHATOW in Lodz. This past weekend Zenit lost 2:3 to Dinamo KRASNODAR but still keeps the top of the charts in the national league.

“This defeat was a slap on our face but also a good lesson we have learnt before our matches with Dinamo MOSCOW. If he had won in straight sets, we’d be too relaxed now, so this was a good way to find focus and determination” says Zenit KAZAN middle blocker Alexander Abrosimov.