Rebecchi Nordmeccanica PIACENZA scored an away win to edge Rocheville LE CANNET in the first round of action for the 1/4 finals of the 2013 CEV Volleyball Challenge Cup – Women. Sanja Bursac paced the home side with 23 points. 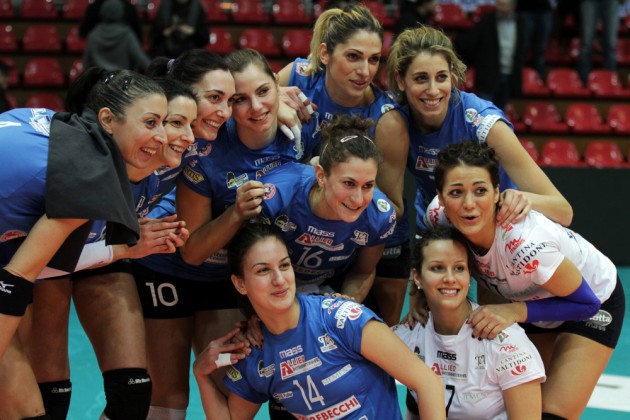 The start of the game was extremely close with PIACENZA trying to break away in the score but with Rocheville LE CANNET responding well and eventually controlling the operations after the second technical time-out. The guests from Italy were nevertheless able to keep the score tight but after missing out on a first opportunity for the 1:0, the hosts scored three consecutive points to seal the final 27-25.

Rocheville stormed out to a provisional 5:2 lead in the second set but PIACENZA responded by claiming the next eight rallies to flip the charts around (10:5). LE CANNET did not surrender and could even reduce that gap to a minimum (11:10) before PIACENZA found back their best game to cruise to the front (19:12) and comfortably pocket the second set with the score of 25-15.

PIACENZA quickly imposed their quality in the third set (9:3) and even though Rocheville LE CANNET attempted a comeback, two time-outs asked by head coach Davide Mazzanti helped the Italians restore their leadership (19:17, 22:20) before accelerating the pace to finish it off at 25-20.

PIACENZA dictated the pace of the game all the way through also in the fourth set enjoying a margin of 3 up to 5 points; once more Rocheville LE CANNET fought back after the second technical time-out (19:17) but PIACENZA did not lose composure to finish the game with the score of 3:1 (25-17).