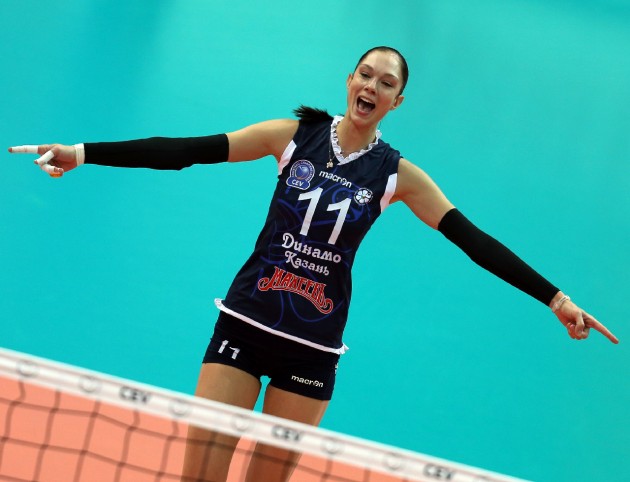 Some 12 months ago Dinamo KAZAN edged Azerrail BAKU at the golden set to advance to the last stage of the competition where the Tatars finished third after losing to Fenerbahce in the semis and edging Italy’s MC-Carnaghi VILLA CORTESE in the bronze medal match. Curiously the Italians were mentored at that time by the present head coach of Rabita BAKU, Marcello Abbondanza.

Rabita has got many players who previously played in Russia, including Angelina Hübner-Grün who last year helped Dinamo MOSCOW edge Dinamo KAZAN in the final of the national cup and was even voted MVP of the Russian Superleague at the end of the 2011/2012 season.

This past fall Rabita participated in the FIVB Club World Championship in Doha, Qatar, losing there the final match to Brazil’s Sollys OSASCO in straight sets. The team from Azerbaijan has swept all of their matches so far in the CEV Volleyball Champions League and tops the charts of their national league with 9 wins out of 11 games.

Dinamo KAZAN is also performing brilliantly in the domestic arena with 15 consecutive victories in as many matches, the last claimed this past weekend against Omichka OMSK REGION in straight sets (25-21, 25-14, and 25-12) with Ekaterina Gamova being once more the best scorer for the Tatars.

“Gamova can cause many problems to any team but apart from Katya, Dinamo KAZAN has got many more great players, for example, US American Jordan Larson-Burbach. We will have to fight bravely but still expect to make it to the final four” says Rabita middle blocker Natasa Krsmanovic.

“Our team is in full swing but our opponent is very strong so we are ready to take this matches very seriously” concludes Dinamo KAZAN head coach Rishat Gilyazutdinov.