Zurich, Switzerland, January 30, 2012. Switzerland’s Volero ZURICH was pretty happy with the results of the DOL for the 1/8 finals of the 2012 CEV Volleyball Champions League since they got an affordable opponent in Azerrail BAKU, the group that is currently second in the standings of the Azerbaijani national league topped by the 2011 club world champions of Rabita BAKU. 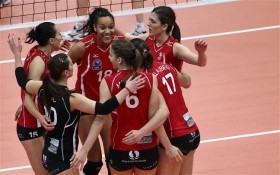 “We could not ask for a better opponent than Azerrail” says Volero President Stav Jacobi.

“It is a side within our reach and we know their players quite well” he notes by recalling that their libero Valeriya Korotenko and setter Oksana Parkhomenko spent some time in Zurich back in 2006/2007.

Another familiar face will get back to Switzerland by representing Azerrail, as Nootsara Tomkom who originally hails from Thailand was named MVP of the 2008/2009 Swiss national league while playing for Kanti SCHAFFHAUSEN.

Tomkom will replace starting setter Parkhomenko who got seriously injured in the last prelim match with 2004 Tomis CONSTANTA and will be out for the remainder of this season.

Azerrail second setter will be Pelin Celik, who has been playing also for Turkey’s national team in the past.

Volero will be also missing a key player, namely team captain Mandy Wigger who suffered a knee trauma on Sunday while playing Sagres NEUCHATEL for the national league.

“If you scout the videos of Azerrail you will be immediately impressed by the terrific power of their spikes” says Volero head coach Svetlana Ilic.

Her girls will have to pay much attention to Polina Rahimova, Aksana Kavalchuk and Elisangela Pereira.

“It is very important to neutralize these three players via our block-defense system” adds Ilic.

“After watching their matches for a few times we have realized that they also have some weaknesses, and namely their reception. We shall try to take advantage of this” she concludes.