Istanbul, Turkey, January 30, 2012. Two teams from Turkey’s megalopolis, Istanbul, i.e. Eczacibasi VitrA and last year’s queens of Vakifbank TTelekom, will be crossing their ways this coming Thursday, February 2, for the fourth time in the Playoffs – actually this year they are renamed 1/8 finals – of Europe’s most elitist club competition, the CEV Volleyball Champions League. 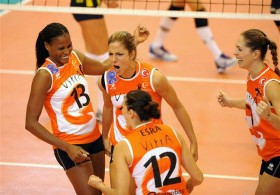 Eczacibasi and Vakifbank prolong their rivalry for another classy showdown

“Last year we played Vakifbank in the Playoffs 6 and they eventually qualified for the final four” recalls the head coach of Eczacibasi, Italian-born Lorenzo Micelli.

“Since we have been playing each other quite many times in the European Cups, in the national league as well as in the national cup, we know our respective strengths and weaknesses. We believe in our chances as we want to continue our campaign to be finally crowned Europe’s champions later in March” he adds.

The return match is scheduled for next week, February 9, always at “Burhan Felek” Volleyball Hall in Istanbul.

CEV CL: Remake of a legendary duel in Friedrichshafen