CEV CL: Remake of a legendary duel in Friedrichshafen

Friedrichshafen, Germany, January 31, 2012. In 2007 it was the final act, now the teams face each other for the Playoffs 12 of the CEV Volleyball Champions League: the match between VfB FRIEDRICHSHAFEN and TOURS VB on Wednesday night is the remake of a legendary duel in Volleyball. 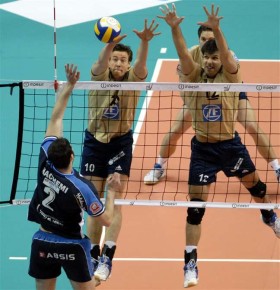 Remake of a legendary duel in Friedrichshafen

Back on April 1, 2007 VfB FRIEDRICHSHAFEN celebrated its triumph in Europe’s most elitist club competition with a 3:1 victory against TOURS VB.

It was the first title for a German team in the CEV Volleyball Champions League and a historic success for the club from the Lake of Constance.

“Everybody who was there will never forget this final” says Jürgen Hauke, the CEO of VfB FRIEDRICHSHAFEN.

Now, four years later, these teams are crossing their ways again and try to make a first step forward to the Playoffs 6.

“A victory at home is obligatory”, says Hauke.

But Stelian Moculescu, coach of VfB FRIEDRICHSHAFEN, answers: “I would not say that it is obligatory. TOURS VB is a team which you have to consider stronger than ours”.

The winner of the 2005 CEV Volleyball Champions League knows how to impress with a strong service.

Opposite David Konecny is ranked third in the statistics of the best servers of the 2012 CEV Volleyball Champions League.

But the service is also the weapon that the Germans want to use successfully.

“We need to serve well”, says Moculescu. “If we are able to do that, a consistent reception will be another advantage”.

VfB FRIEDRICHSHAFEN captain Joao José is looking forward to the match with respect.

“It will be difficult”, says the player, who took part in the 2007 final and is the only player that is still part of the current roster.

“But we have a chance, because we play at home and improved much during the last months”.

The fact that FRIEDRICHSHAFEN played the last matches in the Bundesliga against the three last-ranked teams of the charts is not a disadvantage in his opinion.

“There are two sides”, so José. “The level of these matches was not too high. But we could already focus on the next challenge in the Champions League.”